Floating in the sky

Floating on a breeze

I hear you mutter….

Floating up and up… 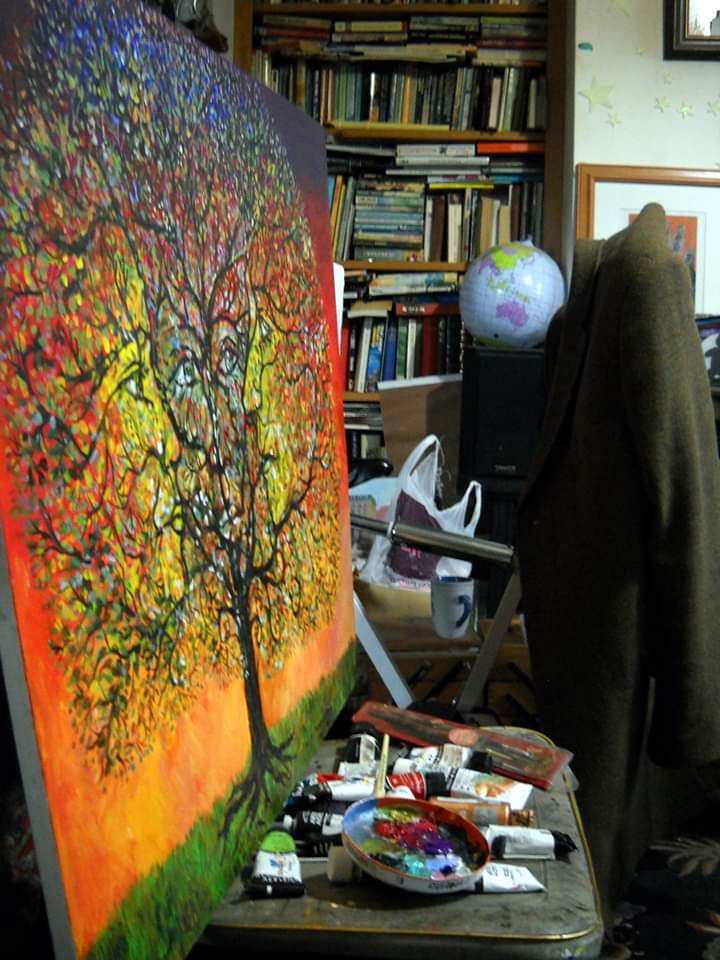 This is an idea I have painted a few times. I’m convinced that we need to do more to encourage tree planting. I guess I’m a bit of a tree hugger on the quiet!

I’ve painted trees with faces in them from spring, to autumn and winter. I’ve not done a summer one so far.

This went to a friend who really loves it. There are three faces in the painting as you can see. I did have a picture of it from the front but can’t find it. This came up on my Facebook page ( a useful way of recording my art). I was really pleased with the bright colours in this. I wanted it to look like a glowing sunset. The faces are mysterious and stare out at each other. I think it’s slightly surreal. I admire the movement but it probably needs more of a twist to it to actually be classed as surreal art.

A process of cropping, mirroring and flipping images to create interesting patterns. I think the final result looks like a little owl reflected in water. I’ve changed the tones and hues slightly in the image to enhance the shadows in the cloudscape. The idea has always been to have abstract shapes apparently floating in the sky. It’s a recurring theme of mine. 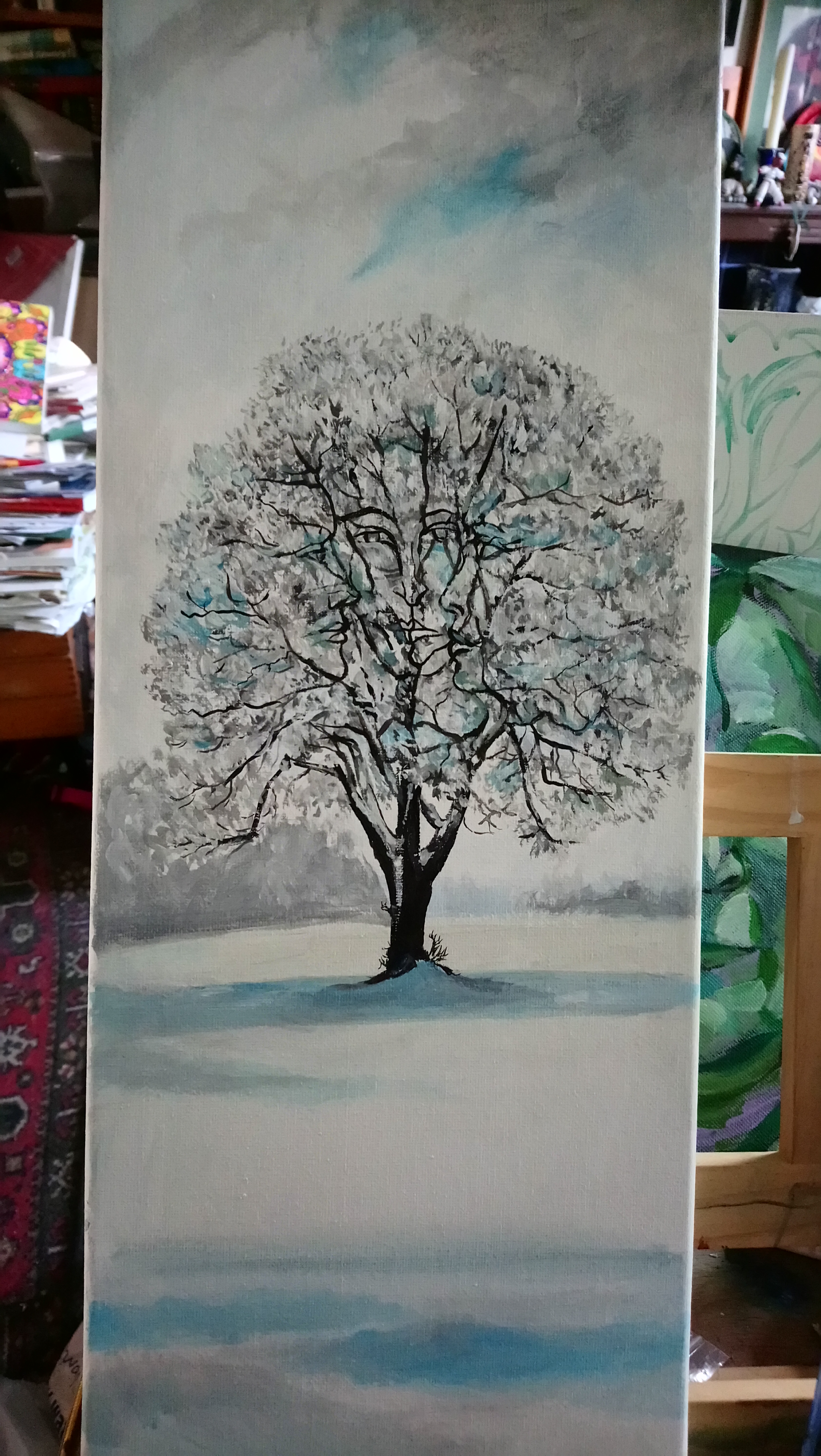 Well I did it! The painting is long and thin, so I might add something to the lower third of the painting….

Oh I don’t know! I can’t decide. Done a little sketch to think about it. I like doing surreal things, it’s hard to get it right but it can work….. Anyway I’m going to finish my lion painting and will come back to this….

I like surreal art and I’m trying to decide whether to add faces to my winter tree painting. I’ve added them in a sketching app just to get an idea of how it would look?

What do you think? Should I? Dare I? Or not? 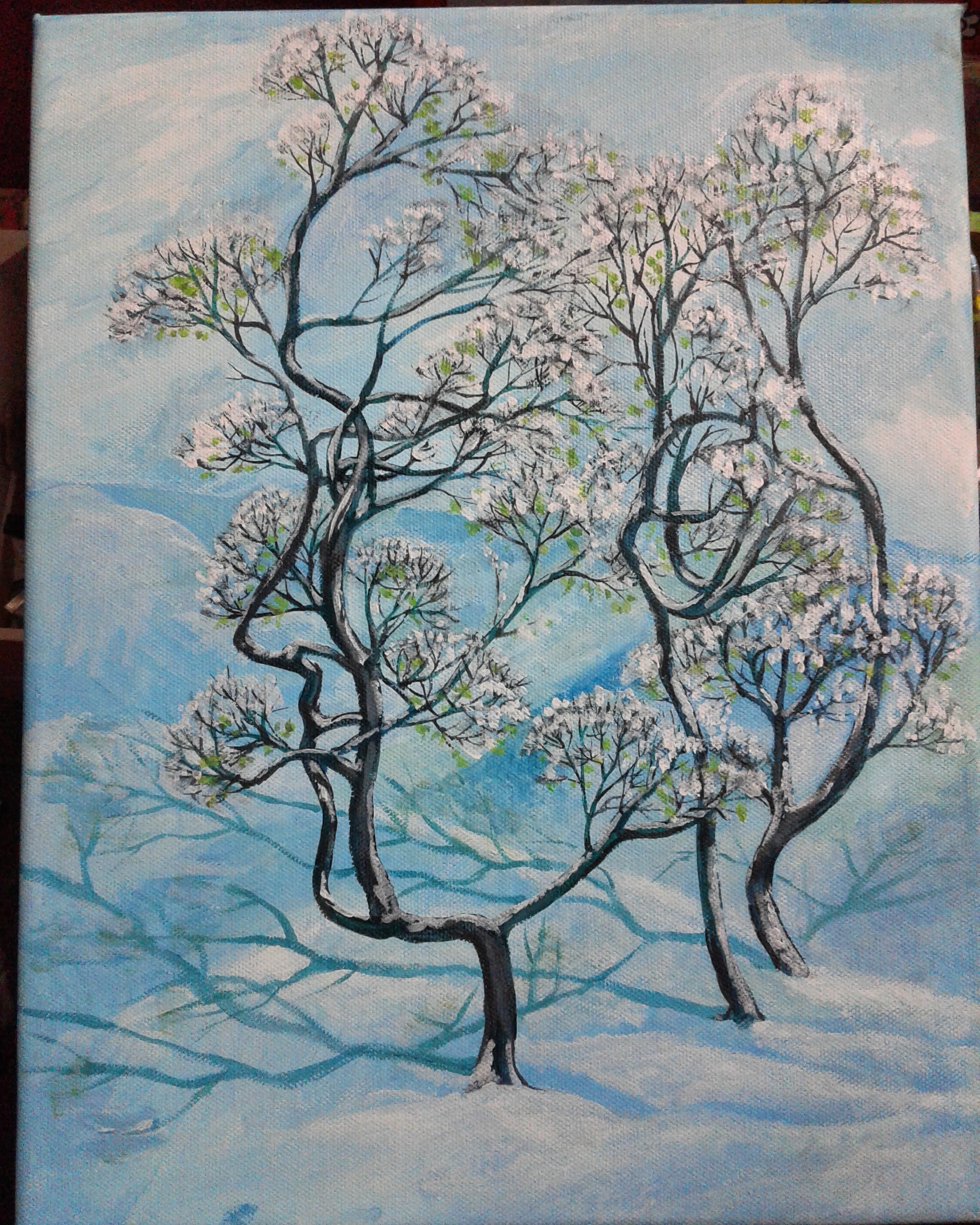 My winter woman has turned into an early spring woman snow is still on the ground but cherry blossom flowers have sprung from the trees twigs and branches, it feels like an old surrealist painting, and I don’t object to that but I wish I coukd do better details .

This has been a fight! Hours of messing about with the shading and shaping of the branches. It’s not finished yet…..but I need a rest. Night all.

Using the Layout app from Instagram, I created this surreal image using a photo of a local canal with a strange thin building projecting upwards from what appears to be a circular or oval pool, the water was so still it had a lovely reflection on it, and this has added to the final picture.

The building is the edge of an old, derelict, warehouse that stands like a cliff face next to the canal, in the past ware from the pottery would have been transported from the pottery, south and east to the Midlands or north and west to the coast at Liverpool or up to Manchester and beyond. In fact Stoke-on-Trent lies at the heart of the canal system, and was built around the coal, clay and water of this area. Manufacturing of pottery, steel making and coal mining was on a massive scale here. Industrial archaeology will reveal the landscape as an amazing historical treasure trove of creativity. Some of the buildings were lost to demolition and decay, many bottle ovens have gone. The rest have protection orders on them, but are not necessarily being maintained. Warehouses and factories are crumbling. It is sad that history is being lost.

This is what I get up to when I’m ill.

The first painting is a window in a wall at Spode. When I was a child there used to be a tv programme on called Play school. You were told stories and it would say things like look what’s happening through the round/square/arched window.

This reminds me of that.

The snake painting started out as a vague collection if coils. But then I decided to turn it into some sort of snake.

As I filled it in I saw it needed something else, so I added the ladder. I guess I am harking back to my childhood again, where we would play games of snakes and ladders.

Here it is almost finished. I’m not too sure about the colours though. It might need brightening up!

I changed the background and snake a bit more.

I finished this painting by changing the background from black to green, then a dark sparkly red. The problem is I don’t seem to be able to add photos to this peice so I shall have to blog again!