Playing with pattern again, four verticals mirrored. Based on a petunia in a hanging basket. Symmetry is such a wonderful thing. The purple and green work well together. I’m interested in the structure that has been created by duplicating the shapes. These could also be strange alien creatures…. Or even squids!

I thought it would look good! Symmetrical fun! It would be great to actually have plants that were this shape. Perhaps a bit of genetic engineering? Why not have fun with your photos? Keep an eye out for things that might make a pattern and use something like the layout app I have on my phone to get creative…..

Staffordshire University is holding its first degree shows for a couple of years. We went to see the fine art show today. Its also on tomorrow. I thought the show was one of the best I had seen in years. (we go most years). There was a lot of interesting images and ideas. Some exceptional painters and thought provoking installations. I decided not to take photos as each of the students will have their own copyright and I didn’t have permission to take pictures of their work. If you are in the area tomorrow pop in and take a look? Check on Google for opening times. Staffordshire University, Shelton, Stoke-on-Trent, Staffordshire.

Look at the size of the hand in the background, apparently stroking this cat? If it were really that size the cat would be as big as a pony! How does this work? The cat was very close to the camera and appears large, the hand is my hubby’s, he sat about a foot away and this is his right hand, furthest away from the cat. It’s a bit blurred because it’s at the back. This is called depth of field. If you think of a photo as being in layers from the closest layer to the lens going backwards in slices then the deepest part of the feild of view is at the back. If you have a shallow field only the things at a certain distance will be in focus. With a deep feild all or most of the photo will be in focus. This is most noticeable in the deep field view of the universe with the Hubble Space telescope. In the pictures from that you can keep zooming in to see more and more detail. Sorry for the non technical explanation!

Reflected on a table top. Polished circles look like metallic scales. A layer of smeared washing liquid leaves a texture and using the layout app on my phone I mirrored and duplicated the images. I almost see metallic blue feathers?

His paws look so small. A clear example of foreshortening. Where the image looks bigger where it is closer to the lens. If I had taken the photo from right in front of him it would have been more in proportion. Taken from near his feet and his head would look tiny. Also its about depth of field. If you look at the photo it is all in focus, but if you change the depth of field you can get one section of the photo in focus, and other parts (closer or further from the lens) blurred/out of focus. It’s not something you can do with a phones auto focus but probably if I played with the manual settings I could do something? I finally changed it to a black and white filter to emphasise his fur. 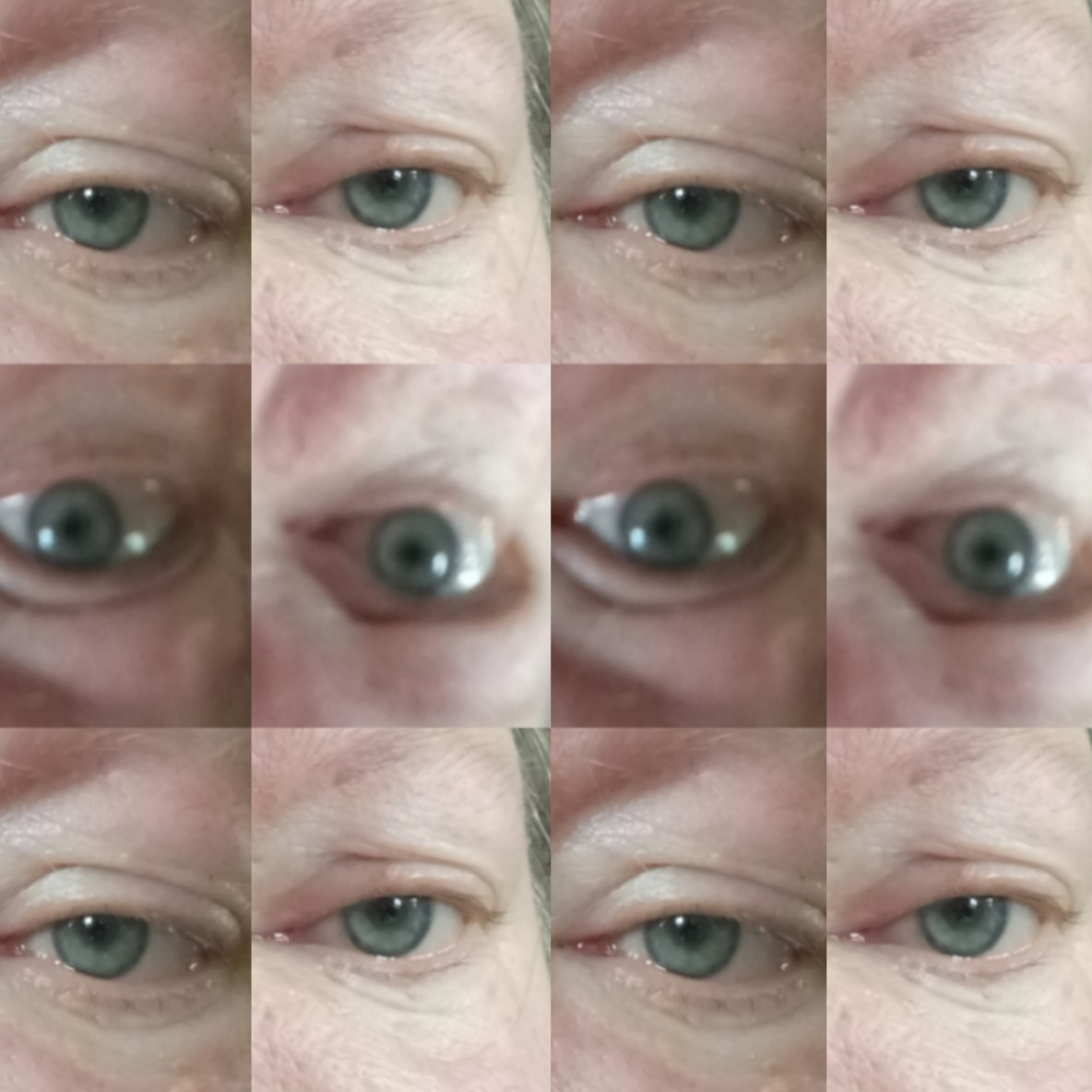 Eye look into my eyes and eye think why are you there? Eye don’t know if eye understand this post but eye do know eye say eye a lot! Eym might try and stop, or maybe eye won’t?

Goodnight, the eyes have it…

Two images taken with the phone on my camera tonight. I took both on the manual setting on the camera as the auto choice was over exposing it. I altered the exposure so that the sky appears darker and the moon is more defined. I didn’t know how to do it. I just clicked on the tools and messed about with it. (This was the last time I took a photo of the moon and I haven’t altered the settings since).

I also had to zoom in x 5 to get a big enough image to see the moon. Then I cropped it to enlarge it. In all of that I was expecting some camera shake but its not too bad. I leant my elbow on a large glass jar on the kitchen cupboard to try and make my image steadier and I also held my breath. 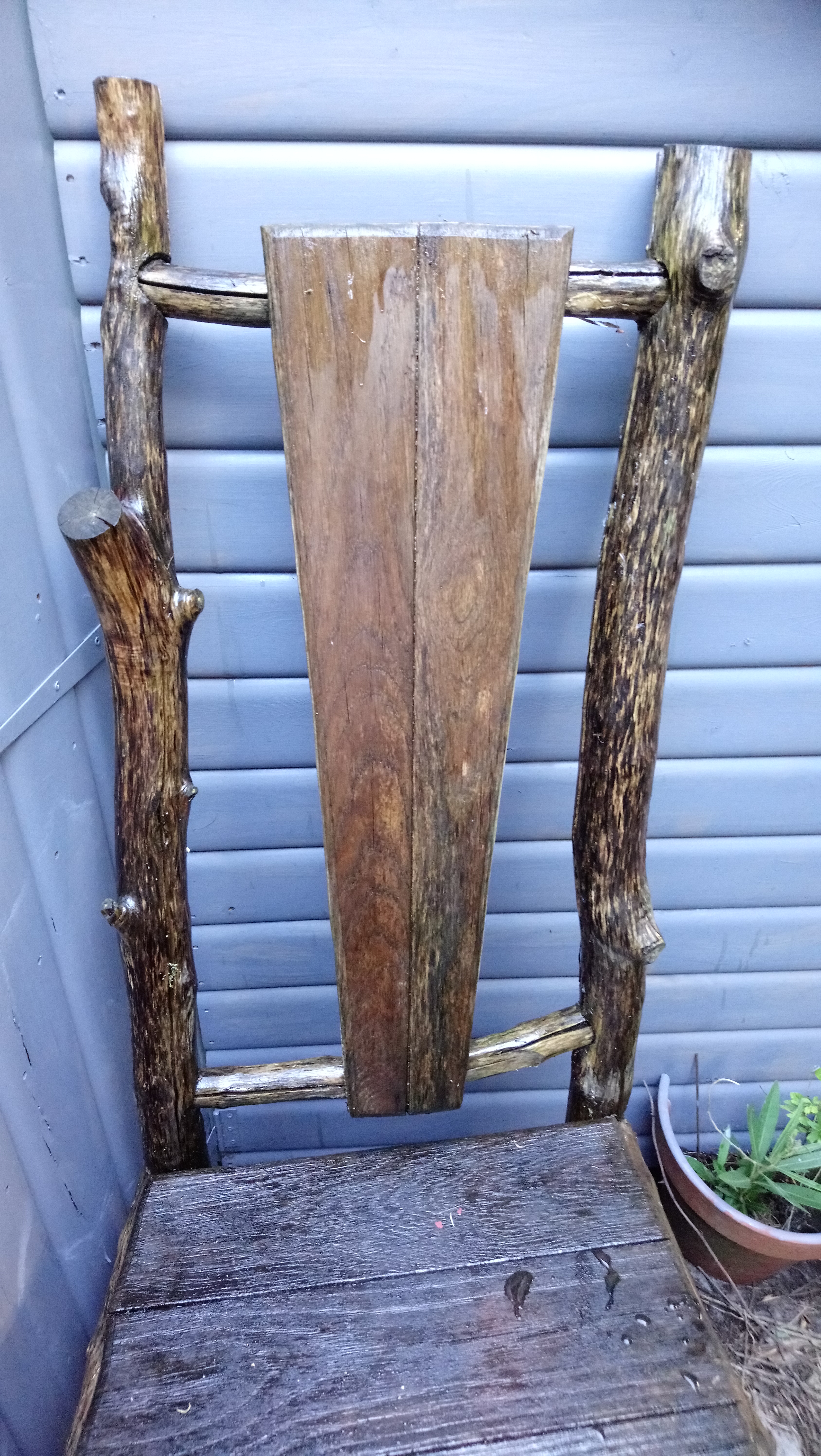 Grey shed (painted in a colour called silver birch) and yatch varnish on an old wooden rustic chair that my hubby got for his birthday a few years ago.

I like the contrast between the smooth wood of the shed and the rough timbers of the chair. Hopefully they will be protected for a few more years.

You stare, and think.

You watch and wait.

You know what you want

How to get under my skin.

You just have to look at me.

And the food is in your bowl.