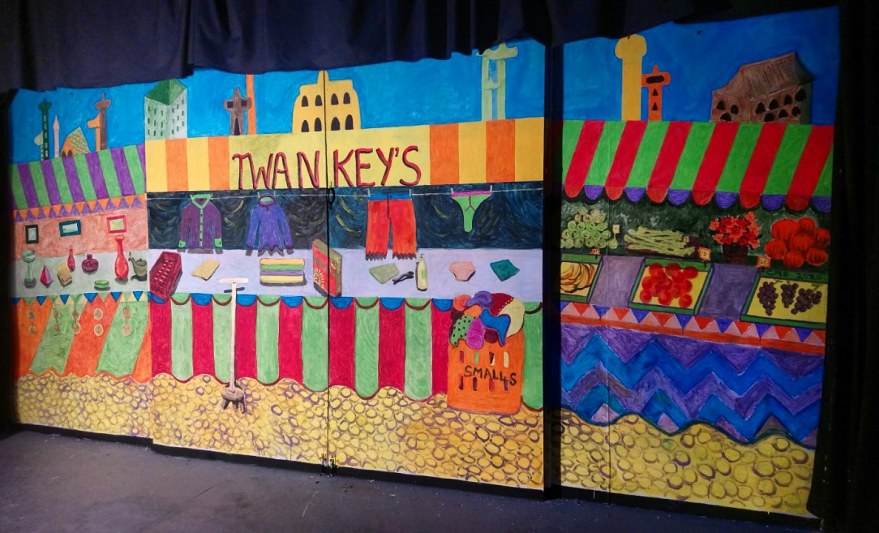 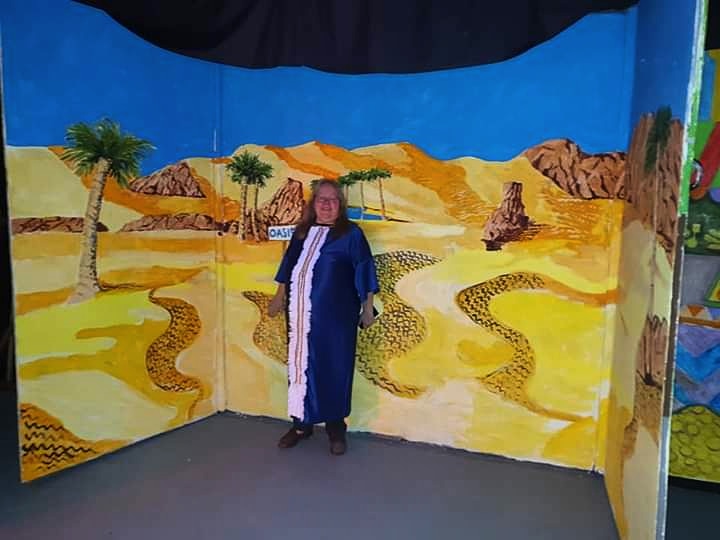 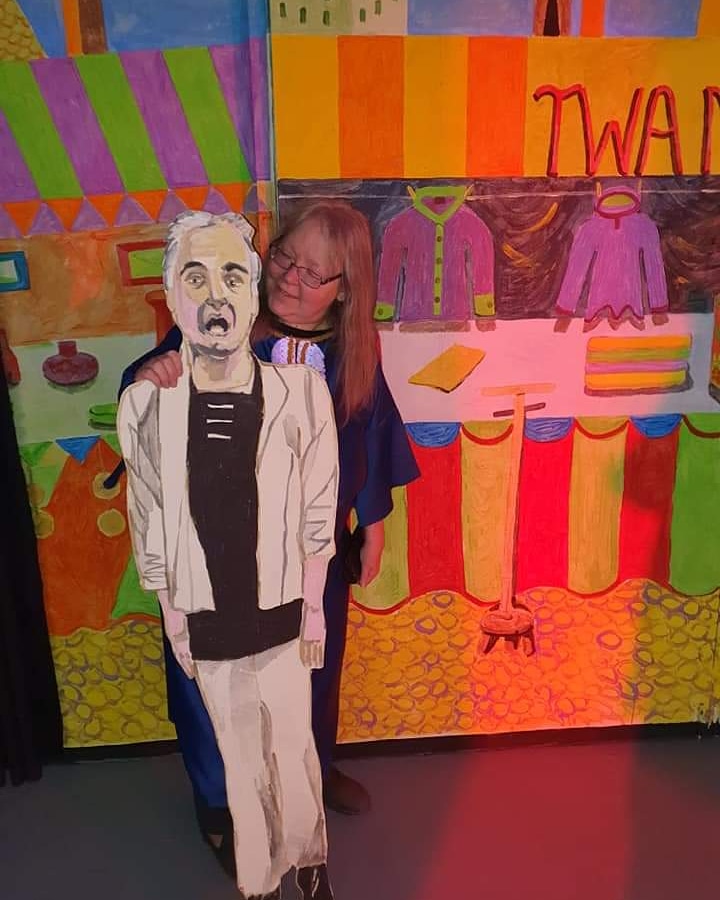 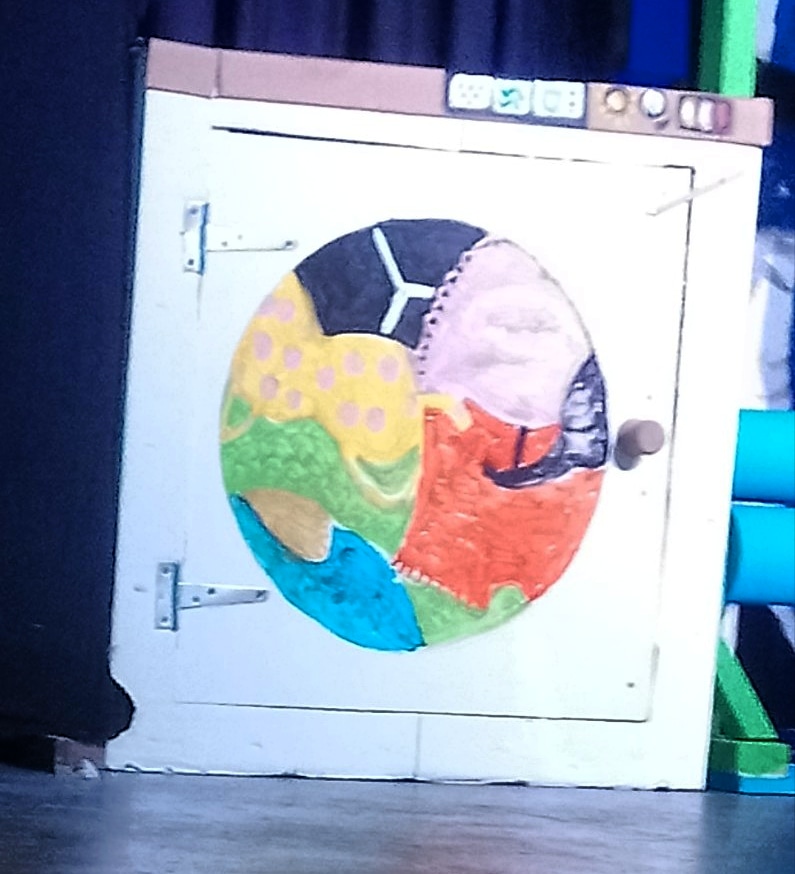 Now the panto is over I can share the scenery paintings I did. The market scene was painted with the help of John who started it, (he’s one of the stage cew) and he helped me with the sky on the desert scene. The flat figure came back out of the “mangle” after the character playing a policeman crawled through it in search of Aladdin. I also added clothes to the front of the “washing machine”, the man playing a second policeman crawled into it, and after a few seconds a child climbed out, as if shrunken, but with a full sized uniform!

I had a lot of fun doing these, and I may be painting a mural in Wales now I’ve finished doing this. 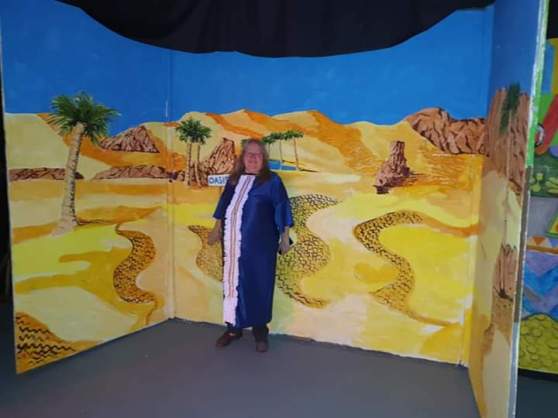 Oh yes it did! All my hard work seems to have been appreciated with the scenery. The panto is a hoot, with compliments about how good it is. The songs were OK. I almost remembered them! I only forgot one line, but non of us were 100%, but that doesn’t matter as the audience haven’t read the script! We even seemed to dance well. All the cast were enjoying themselves and the audience were appreciative, even with a delayed start due to a parking issue. They laughed all the way through and there was some brilliant clowning about.

Well, only three more performances. I’m shattered, but too tired to sleep.

Panto rehearsal again tonight… Oops, the body DIDN’T line up on the back of the flattened policeman. But I can sort it out. The rock for the cave scene works fine… The washing mashing machine looks OK too I think…. Anyway its all kicking off next week… Four performances over three days.

Thursday, Friday and Saturday next week are going to be very busy.

I’ll try not to break a leg!

Papier mache rock, for the pantomime. It is covered in newspaper and was painted with white emulsion. As I painted it the undercoat of white kept flaking off. I’ve painted it to look like the top is catching a ray of sunlight and the base is in shadow.

While I was doing this I also painted a flattened figure of one of  the policemen in the panto. He has been through a mangle and has been squashed flat. I had to do both sides but I didn’t do each side the same so I might have to repaint the back. Finally I painted clothes on a pretend washing machine. The door opens and a policeman climbs in. Then a child comes out in similar clothes, as if he has shrunk!

I’m only showing you a bit of sky and some rocks I painted today as the scenery for the panto is secret. Basically I painted a desert. I had help with the sky (the black is a short curtain above the scenery). I’m too short to reach the top of the scenery. I am absolutely shattered now. 2.30pm to 6pm!i know I paint fast but that’s ridiculous….. About ten foot tall by 30 to 40 foot wide. I will publish the full image when the pantomime is over. Its thin acrylic paint on flat boards. 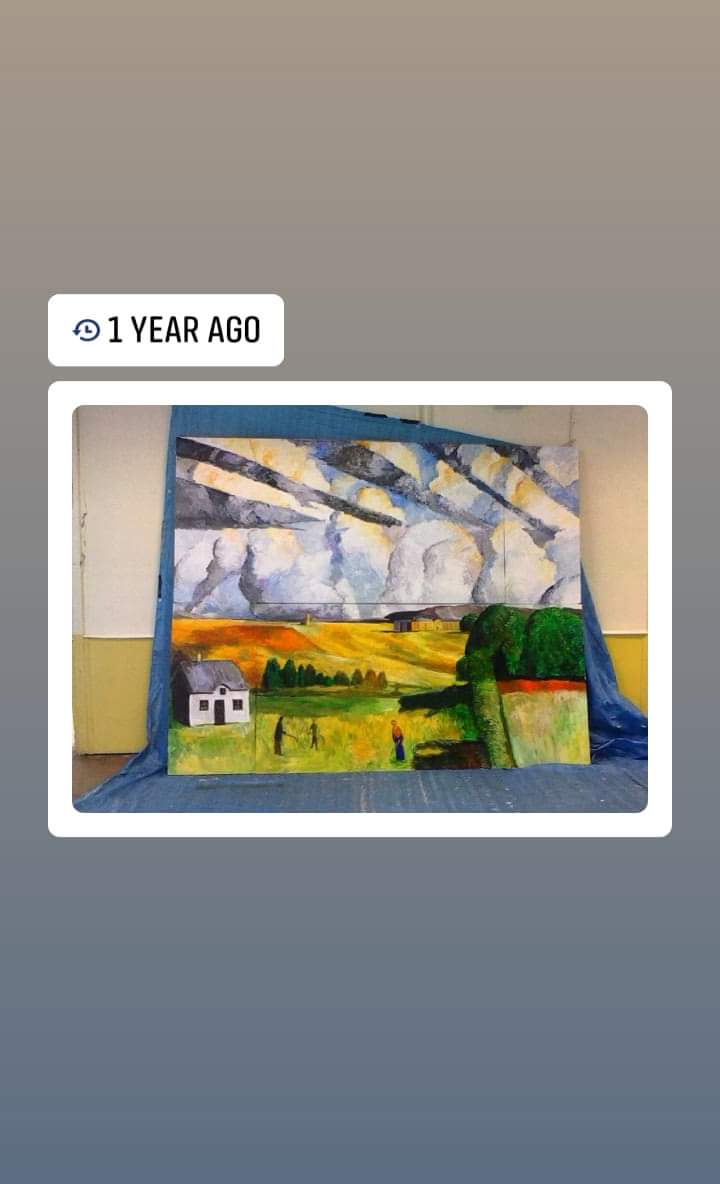 this is the scenery I painted last year. Two eight by four boards attached together to make an eight foot square panel.

In some ways painting on calico is more difficult because of the way the paint sits on it. However at least I’m not struggling to line up the two sections. I do love doing this. It makes my year. 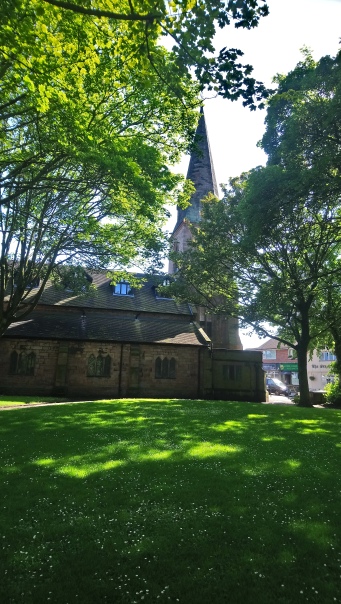 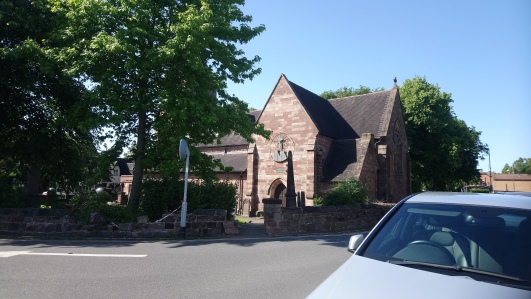 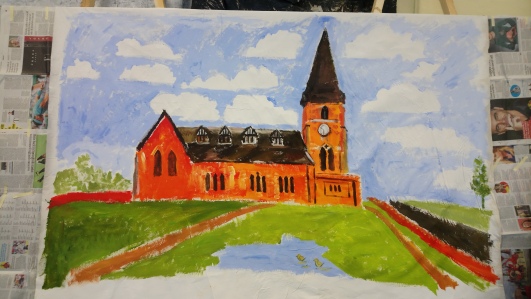 I’m doing some backdrops for the Penkhull mystery play. I have calico to paint on, rather than static flat paintings that I usually do. This years backdrops are going to be rolled up and dropped down for the appropriate scenes.

Today apart from painting two willow pattern birds on papier mache I painted an eight foot by four foot backdrop of the church.

The problem was seeing the church through the trees. These mature lime trees have grown tall in the intervening years since the Church was built in the 1840’s. The backdrop is minus the trees. There was apparently a quarry and marl pit at the top of the hill which eventually filled with water and was a duck pond before it was filled in. There was a school on the land before the church was built and it was rebuilt at the top of Trent Valley Road (now the village hall). At the alter end of the church on the outside there were pigsties. I think these must predate the church.

More information about the village of penkhull can be found in books by the local author Richard Talbot.

More painting news will follow when I paint more.