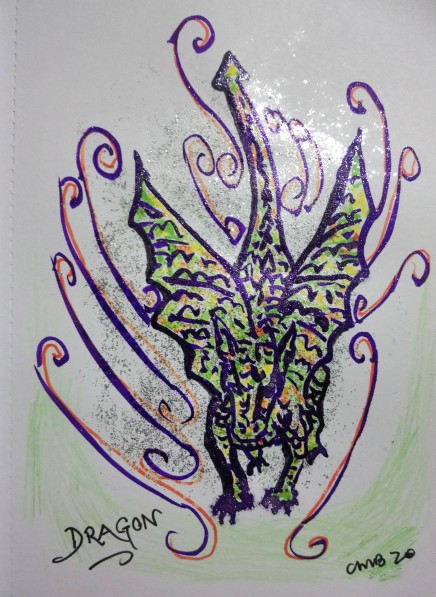 The dragon flew into my sketchpad from my imagination tonight. I was watching a series called Merlin on TV and it just sort of happened. The purple ink pen went a bit splodgy.

The world is still in lockdown. People want to escape but its not safe. So playing with glitter glue, ink pen and felt pens is just taking my mind off it. Then edited it to a negative image to be a bit different. 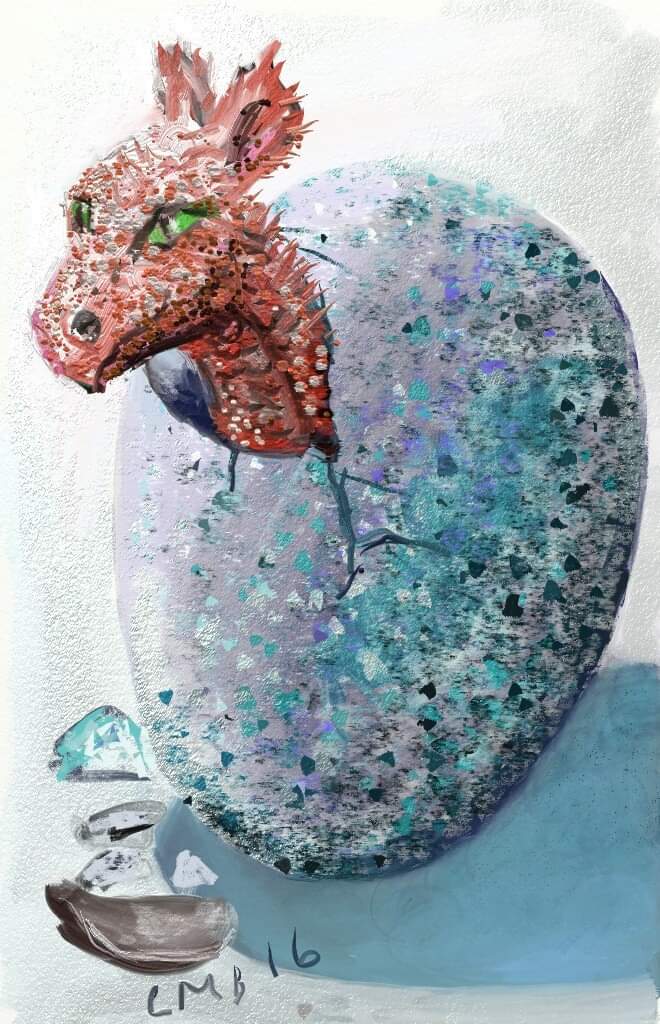 Another four year old picture from my memories. Another one done in ArtRage. Just a bit silly and fun. I think it started out as an attempt to draw an egg, then I got a bit creative. I’ve illustrated a book before, and this could be used for that sort of thing.

Drawing from your imagination is more difficult because you have to have an idea of what you are drawing in your head. I often describe what I’m drawing to myself so that I have an idea of how to depict it. I want to get my mojo back! 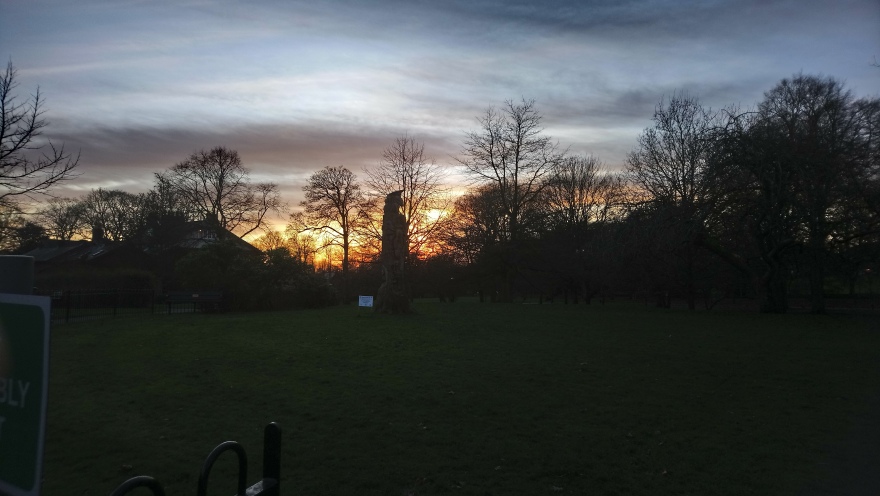 The night had passed and Drulk, the grandfather, looked out from the dark Forge. The sun was rising. No sign of his son or grandson. He knew they were captives of the Dragon Lord and his beast Hirst. But somehow he knew in his bones that they would return…

Meanwhile, in the dungeons of the Dragon Lords castle, his son and grandson sat in the dark and damp. They were waiting to hear their fates.

Brerd was the old man’s son, his boy was called Srep. Neither of them had eaten or drunk since their capture.

‘Father will we die here?’ Said Srep.’ No, I don’t think so, son. I think the Dragon Lord wants strong slaves. But wait and see. I will try and free us if I can.’

Hours later and the sun had set. Two guards arrived and unlocked the barred door. Shackling the man and boy, they roughly pulled and dragged them out and up the stone stairs. Up and through tunnels and corridors, into the Great Hall.

Hirst lay stretched out on the rock surface at one side of the hall. Head lolling to one side. Eyes half closed.

In front of them, sitting on a throne, the Dragon Lord looked down on them.

Abruptley he said ‘what have you done to Hirst?’ ‘he is ill’. Brerd shook his head ‘he is poisoned, if you free my son, I will tell you how to save the dragon.’ At this the Lord shouted, ‘You poisoned him? How? Your son will die for this, not be freed. How dare you try to negotiate with me!’ Brerd shouted back, ‘then fight me. If you win you can make us slaves and gain the antedote. If I win we go free!’

He didn’t expect the Lord to agree to this so was shocked when a sword landed at his feet. ‘unshackle me, so I can fight’, ‘No’ came the harsh reply.

That is how Brerd the Iron master and blacksmith came to fight for his life against the Dragon Lord.

Heaving the heavy sword up he tried to parry the hefty blows from Lord. They rained down on him hard and fast. By luck more than judgement he remained upright. But like a tree trunk being practiced on, he remained mostly static, feeling the harsh crashes of sword against sword. He was being beaten down. His hands were slick with moisture and salty sweat dropped into his eyes. Still he fought on. Then a glancing blow caught his forehead and he toppled forward. The Lord stepped forward to take a final stabbing thrust at Brerd, but instead felt Brerds sword penetrate his chest. He sank to his knees and whispered ‘Hirst, kill them’. But his voice fell on dead ears. The Dragon had succumbed to the poison. It had been the ‘strong iron’ that the grandfather talked about. It was a mixture of iron filings and saltpetre. Something in that mix was death to dragons. Knowing this old knowledge, Brerd had taken a pouch of it with him when they went hunting. As he was snatched by the dragon he had thrown the pouch and contents into its mouth, where strong acid there dissolved it almost instantly. No antedote would save Hirst after that dose, it was just a matter of time.

Using the sword to cut through his sons bonds, Brerd freed Srep., ‘Come’ , he said, ‘ we must go back to see your grandfather and tell him the news. We will release the slaves as we go.’

Later that day, Drulk looked out of the door of the Forge again. Instead of seeing no-one, he caught sight of his son and grandson. ‘Thank the gods’ he shouted, as he walked to meet them. 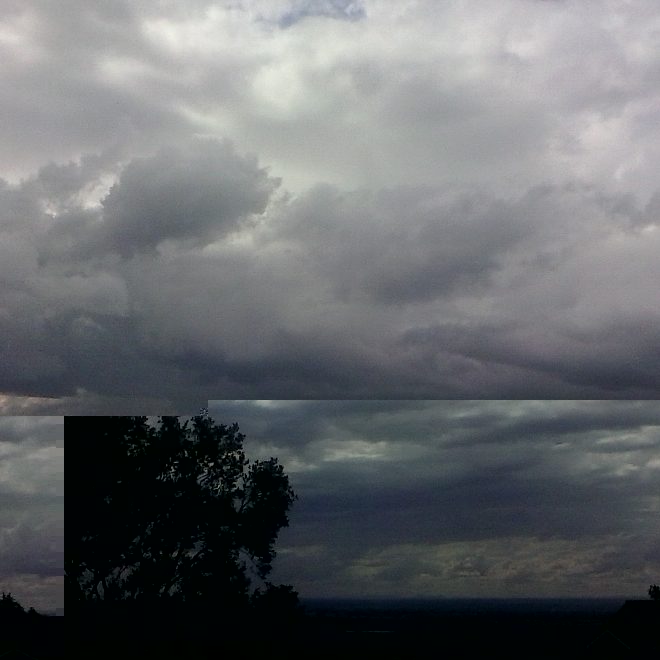 Dark was falling, the clouds lowering, fearful people cowered in their homes. The Dragon Lord was coming, he would take slaves this month and they knew it. Only in the morning would they go out into the world again.

Aging grandfather Drulk hesitated as he closed the shutters to the cottage. He had been lucky and his son and grandson had stayed safe. He was a blacksmith and so was his son. He kwew how to keep them hidden, using strong iron to stop the Dragon Lord sensing their presence. But his son had been on a hunting trip and this was the first time his grandson has gone along. They were overdue. No sound entered the cottage, but if Hirst, the Dragon, came to it they would hear its beating wings many seconds before it arrived.

A knock at the door, Drulk opened it carefully. His grandson stood there, shaking, his clothes torn. They have father, was all he could say.

Drulk held his grandsons shoulders, what happened, he pleaded. We were at the edge of the forest, I tripped over a root and my head hit the ground. Father was trying to help when the Dragon grabbed him in his claws. He is gone….

In Flar Castle, their son and father stood before the Dragon Lord. You are now my slave, you will serve me. Never, said Drulk’s son. I will not serve or help you…..

I’m not sure where to go with this story I don’t write fiction very often… Maybe I should say ‘to be continued?’ I’m not sure about naming characters, it’s hard to decide what to call them… 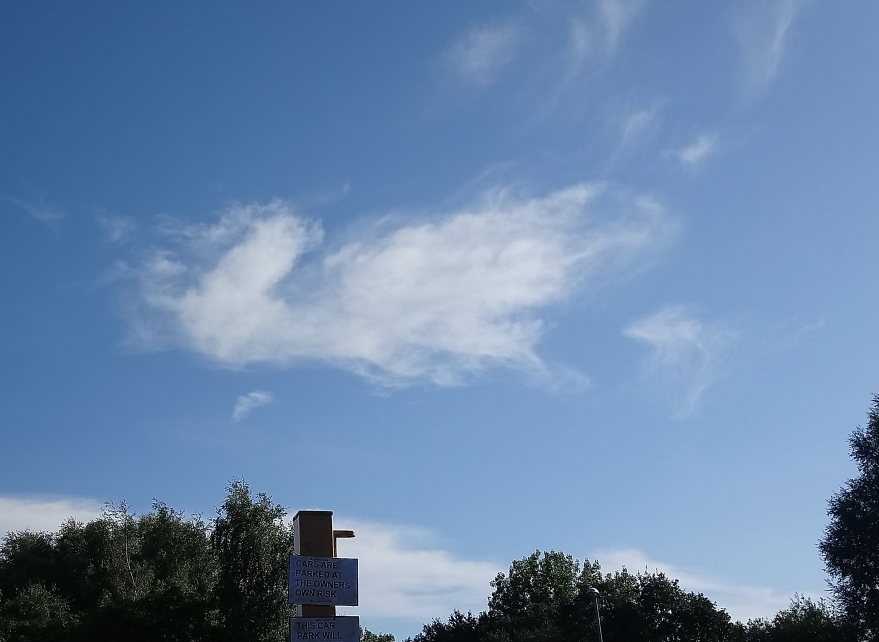 No its a dragon?

Can’t you see its tail.

One front leg raised up,

Waiting to greet its friend

I saw this today above Etruria. It looks a bit like the Welsh Dragon. The head end is a bit wispy… But if you squint?

Breath of flame spinning out

Make sure your dragons scales are kept in tip top condition. Use ‘Dddragon polish’ (tm). Uses gold dust and magyc oil to give them that gleam.

Ice cubes on the underside of the elbows will reduce inflammation (also known as flight elbow).

A spoonful of honey in a gallon of alder oil is good for your dragons throat after a hard day’s flaming.

Remember to wear woollen underwear, it may be hot and itchy but it prevents burns during dragon jousting.

When attempting barrel rolls or loop the loops ensure you have your stirrups in ‘high hitch’ position.

Dragon racing is for professionals. No parachutes are allowed but wing suits are acceptable.

Finally, dragons are not allowed to drink alcohol. The tragic consequences are well documented historically.

This dragon appeared from my garden hanging baskets photo. I liked the green so thought I would play around with the layout and sketch apps that I use.

I wrote a children’s story about a dragon once. It was a long time ago and I think I still have the floppy disc I saved it on. That was in the time of dial up modems when they used to make that funny dial up tone… Dah Di Dah Dah in a sort of metallic tune.

I never had the courage to send it in. It was too worthy I think. Not exciting enough. I asked a publisher to read it and also my friends daughter. I could tell the publisher wasn’t impressed and my friends daughter said I needed to make it funnier. Perhaps I also used too many long words.

Maybe one day I will edit it and try again. Is it sensible to try after twenty years? I’d like my dragon to go free…..