I asked him to get savoury food.

4 tins of tomatoes, a litre of skimmed milk, some mushrooms, brown bread.

I’m diabetic, so I can’t eat any of these and can’t really drink much alcohol. My sarcasm gene kicked in so I told him he was being ‘sweet’, I said he should get me some honey roasted ham or some duck in orange sauce. After I washed the shopping and put it away I asked him how much he had spent. I guess 90% of what he bought is for him.

Half a tub of extra thick double cream

Sugar or sweetner to taste.

A few raspberries for decoration.

Take the two croissants, cut them in half horizontally. Slice a banana in half lengthways. Place one half in each croissant. Sprinkle with a little sugar or sweetner. Dollop the thick cream on top of the banana, then place the top of the croissant back on top. Serve as it is or with a few raspberries on the plate. Tasty and easy.

I must carve its flesh

Before it’s too late

Shall we have custard or cream?

Or just plain and succulent?

Last time we had one..

Looking forward to it.

But is the pineapple?

We bought the pear tree as a small sapling from Woolworths about twenty years ago. It’s grown since then and every year it has had a bigger crop of pears on it. This year there must have been fifty. The tree has tipped over because of their weight and possibly the wind, so we’ve had to prop it up. The bark is cracked and coming off in places, and it suffers from black spot, but the pears are delicious. Some of them rotted on the tree, possibly from being pecked by birds. We’ve got most of them off the tree now and are sharing some with friends.

Photo of milk chocolates that I was given today. Manipulated in Instagram and Photodirector. I shouldn’t eat them, I’ve had a couple ‘to sooth my throat’, hubby’s had some too…

Elaborated the photo by duplicating it in Layout. I like the way the strawberry chocolates somehow turned into mouth 👄 shapes. I rotated the images a few times before I came up with this set. I chose the title, by the way, because I’m not meant to have sugar!

He likes to be seen

It makes him purr

Sharpening his claws too

That’s what you have to do.

When you are a black and white cat.

Not too thin, not too fat.

Ice cold from the fridge, picked half an hour before and rinsed under the cold tap. Fresh from the garden fence (growing through from the neighbours garden), we had a bit of chocolate icecream in the freezer so we added that to the berries. Lots of our fruit plants have been profligate this year. Except for the plum trees? I think the blossom might have got blown off because they are not in a sheltered part of the garden.

The pear tree is almost horizontal, held up with a piece of wood. There are lots of pears set. Maybe I could make a Perry? I could do with a recipe. Mmm getting ideas… 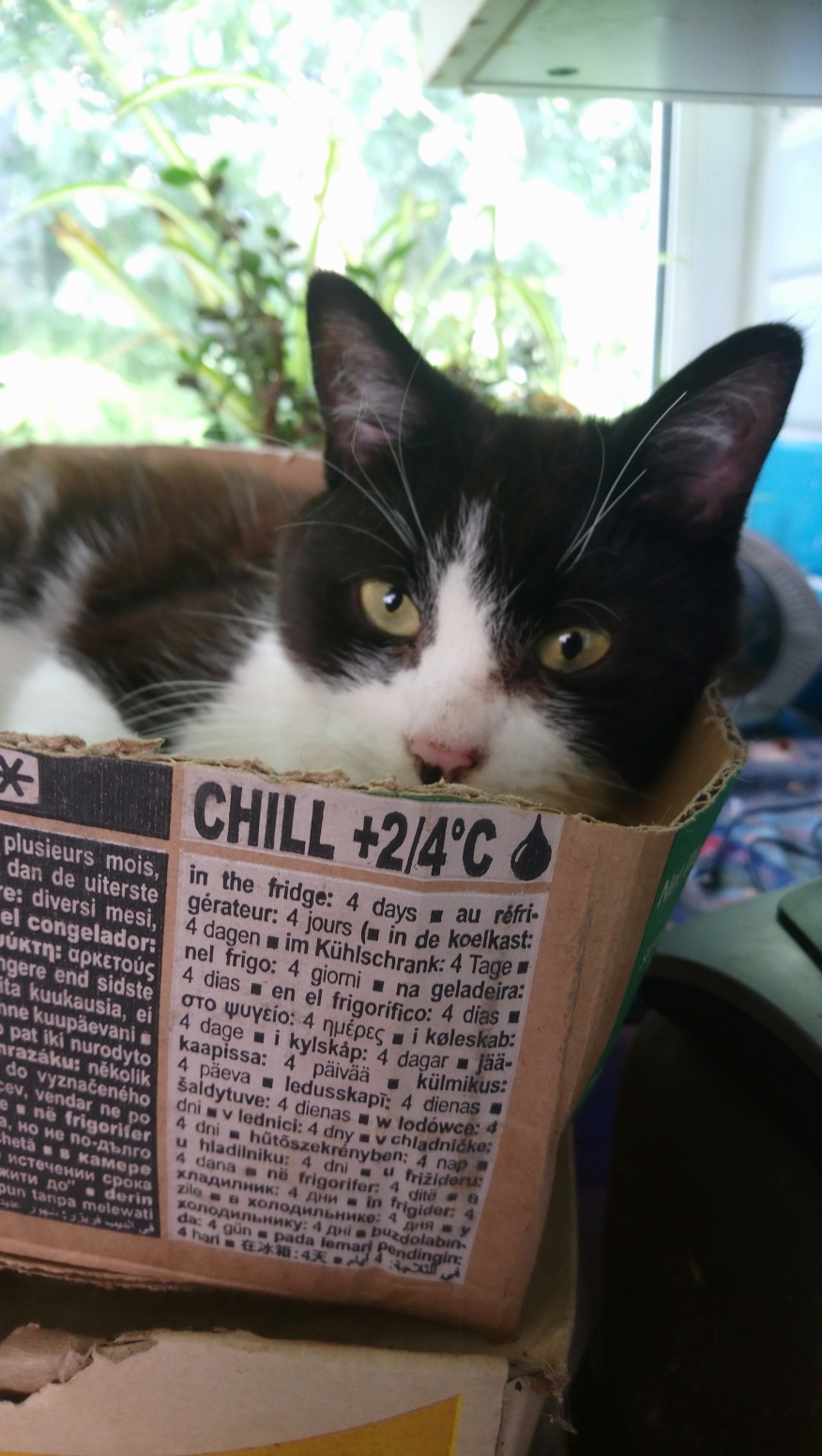 My cat has taken to sleeping in this cardboard box, and I just saw the sign on the side ‘Chill 2/4°C’.

I had to get my camera and take a couple of photos on him. He might not be the cutest cat in the world, but he certainly is the sweetest to me.

He half closes his eyes, and I’m sure he smiles! He finds various places to sleep. This is his favourite place at the moment.

Oh dear! My blancmange was too warm when I put it on top of the jelly. And I got extra thick cream which I over whipped.  The whole thing is a delicious mess!

Now, trifle dipping, what is that? The act of knicking an extra spoonful of trifle after you’ve had your fair share! I’ve been known to slice a thin sliver off our Christmas trifle late at night. It is my favourite dessert.

Happy to be home

A few days ago.

I am forgiven now

The visit is forgotten

Time has given her repose

To rest and be calm

And let me be with her.