Seen in the morning

In the valley in a mist.

With scales or feathers

How ugly they are

For my final college report I’m looking at the history of the depictions of dragons (OK very niche). I’m trying to understand how they were illustrated and how they change across the world. I’ve found out Korean dragons have five toes, Chinese four or five and Japanese three toes. They have different shapes. They go from serpentine to with two or four legs. No wings or wings. Some are fire-breathing. They may be mythical but they seem to evolve.

I’m trying to collate all my dragon images for my college project. I keep finding them in different files and places. I need too take good photos of my art so that I can produce good quality images for it. I was trying to create a middle ages design. More snake like than the more modern style of dragon you can find. Even though they are mythical they seem to evolve! Now I need to do more research into the history of dragons and their symbolic meanings.

I need to start working on my college project. I’ve given myself time to recover from a bad cold, but I can’t ignore it. I need to produce a portfolio of images and a report to go alongside it. I’ve decided to write about the history of dragons in illustrations. Their images in world history, moving forward in time to medieval art and then the present day including their appearances in literature and film. My portfolio will be illustrations and text for a children’s book exploring colour and pattern alongside an adventure. I hoe it works out.

I was standing by this fountain in the small part of Hanley Park. The main section is over the road. I decided to draw this in my sketchbook. It’s a felt pen sketch and I could include it as an urban sketch. The fountain had been restored after many years and looks wonderful. I think it’s probably Victorian in origin. The previous year it was frozen almost solid with icicles all over it. I particularly like the dragon fountain heads on it. I will have to try and research its origins.

Two llots of clouds mashed together, whispy and white, plus a bit of hedge round the back of the house, and you end up with something quite bizarre. An up sweep of wings, black, furry paws and legs. White contrails from aircraft. The sky is my canvas, I even see moths on either side. An Ariel rorschach test…. I see so much… 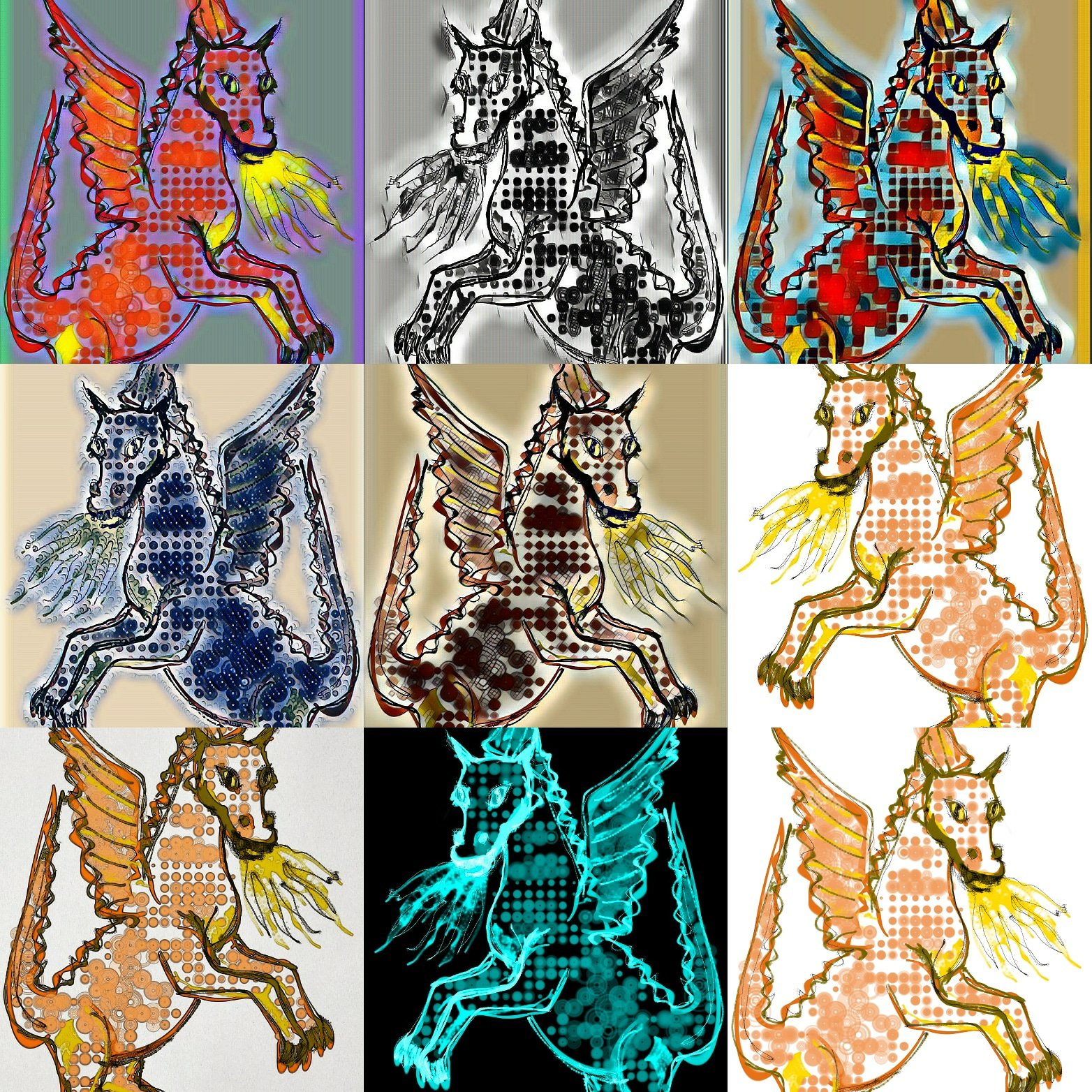 I love doodling and experimenting so the dragon has been morphed a few times in my picsart app. Its still not quite what I was trying to do, but I’ve called this piece “dragon dance”. They seem to be having fun!

I could imagine something like this in a children’s book…crazy little characters all with their own backstories… born from the same clutch. Golden and silver, neon and harlequin…, some bigger than others, I don’t know…I will have to think of a story to go with them. 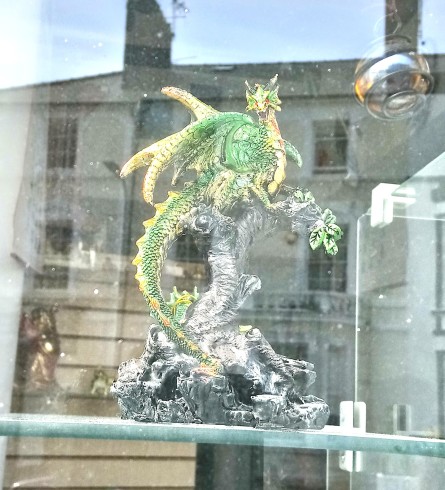 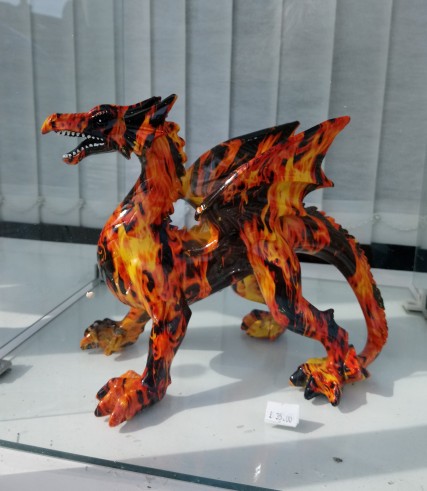 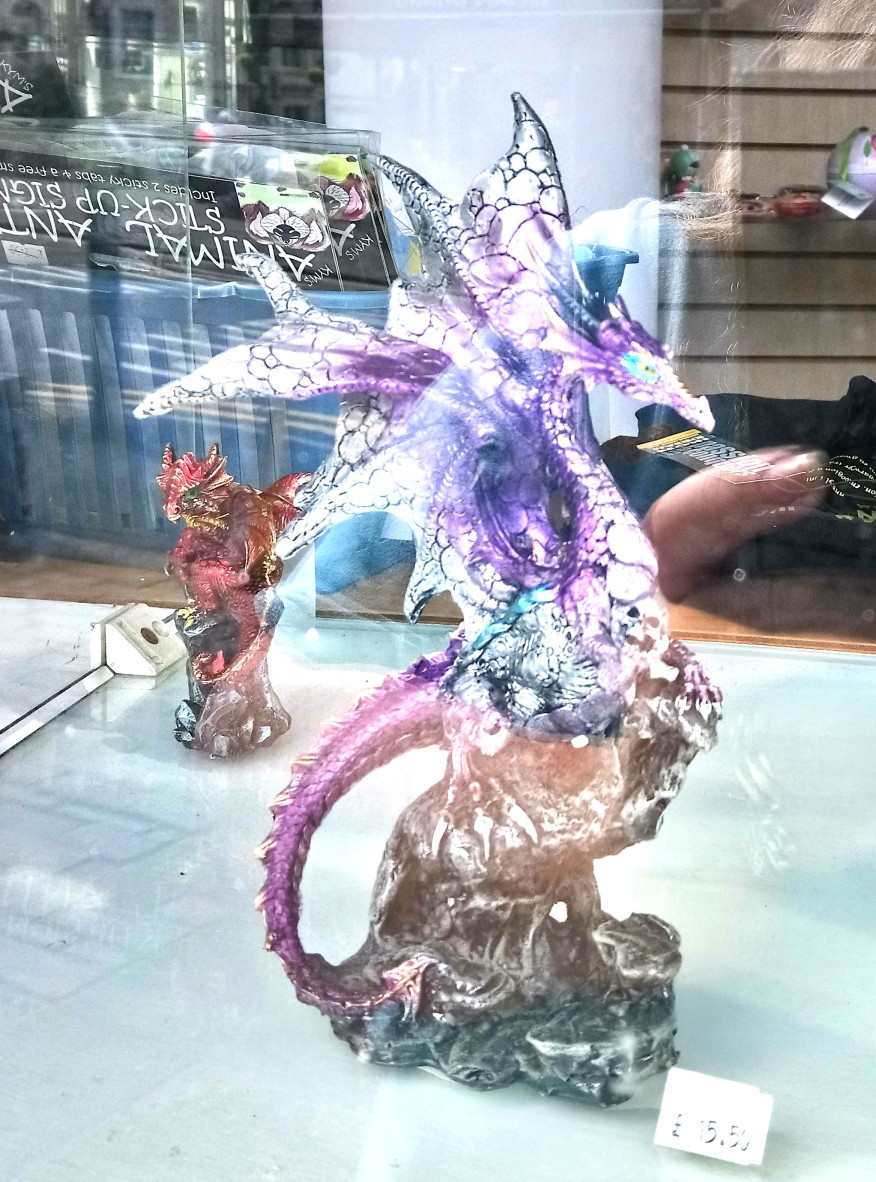 Found these three cuties in a shop in Llandudno. Well the red dragon is the symbol for Wales. 🏴󠁧󠁢󠁷󠁬󠁳󠁿. And the country is full of mountains and valleys where they could be lurking, strangely England’s patron Saint is St George, although he was Turkish as far as I know. By the way, Scotland has Nessie (the Loch Ness monster) that could be of dragon like proportions. I’m not sure about Northern Ireland, perhaps they have their own myth. Although snakes never made it to Ireland and dragons seem to be a distant relation to snakes and lizards.

Being mythological doesn’t mean they may never exist. Maybe a bit of gene slicing could bring about something similar to fire lizards described wonderfully by the fantasy and sci-fi author Anne McCaffrey. She is a splendid author and I would recommend her books. Hopefully though they would not include breathing fire!