Reviewing old photos from a few years ago I came across some pictures of Dahlias. This one of a pompom Dahlia really resonated. I remembered my father used to grow them in the summer when I was a child. He had a whole patch of them, this shape and more shaggy ones. I remember I could see spirals in them. They were all different reds and oranges, whites and magenta and yellows. Striking against the green leaves and stems. They were in a small back garden and next to a pile of soil where we children would play ‘I’m the king of the castle get down you dirty rascak’ not sure how that worked except we competed to be at the top of the pile of soil…. Memories are random and come back infrequently. I just remember the Dahlias and sunshine.

When the Beatles were famous I was a child. By the time they split up I was still not very old. One of my earliest memories was hearing them on the radio. ‘Help’, Love me do’, ‘Yesterday’, I can still remember a lot of the words and tunes and I really feel nostalgic when I hear their songs.

I was a bit older when I heard of the Cavern Club in Liverpool, Merseyside. I never went there but cavern came up as a word prompt for a friend and suddenly I remembered where I’d heard the word. So I looked it up on the Internet (where I got the photo). The original club opened in 1957 as a jazz club. They didn’t like rock and roll but when it was taken over the Beatles started to play there in 1961 (they were previously known as the Quarrymen). Apparently they played there over 270 times. The club itself was a cellar with a curved arched ceiling. It closed in 1973 and was demolished so a railway line could be laid. The Cavern club did reopen but I’m not sure if it still is open.

Button bowl made with buttons and PVA glue. I’ve had it for about three years and it’s in the bathroom. It’s still surviving and the damp air in there hasn’t damaged it.

It contains my collection of marbles. Yes, marbles. Why? Colours, patterns, different sizes. Plus an old cat earring. 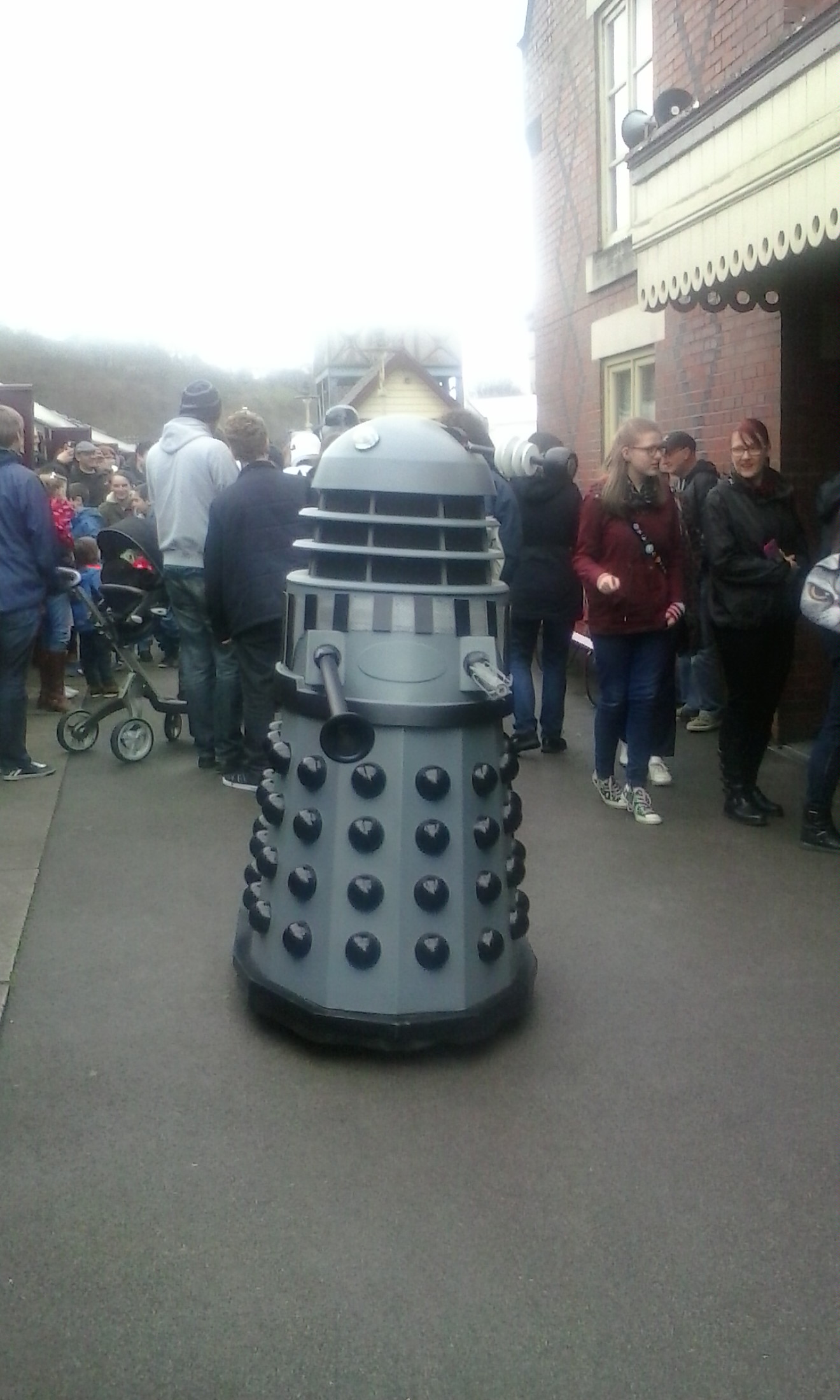 when I was a child

I watched Dr Who

I hid behind the settee,

I was scared of Daleks

This model Dalek was at Froghall Station a couple of years ago, if not more. It was wonderful to see. It was radio controlled. In the original series they were operated by men pedalling inside them and moving the weapons by hand. Nowadays they can climb steps in the modern series by hovering above them. But not in the 1960’s. I watched this classic TV series from the start. I wish I could time travel back then.

Hiding from view being your green screen.

Your roots must run deep down in the ground,

Water running through the earth,

Turning your leaves green before other trees.

But only you swirl and wave in the breeze.

Dancing a ballet of soft leaves,

Your dress curves and waves in folds.

Once fully grown with green

Your leaves will make my hiding den again.

This is a drawing of a railway line plan my husband drew in 1969 when he was about 16. He has always loved railways  and was on the last steam train to leave Manchester Victoria station to Rochdale in 1968. He tells me this was a Stanier black 5 steam engine 460 (which means 4 leading wheels, 6 driving wheels and no trailing wheels).

He actually made the minature railway layout , including bushes and trees, a signal box and a station building and railway tracks on Triang 00 guage.

He had a Jinty 060 number 47606 3F class, an 040 diesel and a GWR single, Lord of the Isles. I guess any railway enthusiasts out there will understand this, but others won’t.

A Jinty was a nickname for a particular type of engine that did shunting, banking, pilot duties and local freight. This was a small type of engine which had a short wheelbase and could get round curves easily. It was designed by Sir John Fowler.

47606 is just its running number which identifies it. 3F means its power classification   (3 freight).

040 diesel is a small dock shunter used by the sea or rivers to carry freight from ships.

A GWR single has a 422 wheel configuration. It’s classed as XP, (express) and could travel at 80 Miles an hour. It could pull up to 400 tons of passanger coaches  ( 6 coaches including the guard’s van).

He has so much knowledge but its locked up in his mind. when I asked him it all came out, how do people learn all this stuff!?

Does anyone remember the kaleidiscopes you could get as a child? A cardboard tube, brightly coloured, with an eye hole at one end and a plastic cover at the other end. You could see little plastic blocks inside the cover which was slightly transparent. As you looked through the eye hole the little coloured blocks would turn and move and because there was a mirrored surface inside you got a symmetrical pattern which was so beautiful.

As you turned the tube the pattern would change, you could hear the little plastic bits move and rattle as the image changed. The pattern was never the same, and because the blocks were different colours it was like looking at a moving stained glass window.

Today it’s all changed, you can create patterns using digital apps but they don’t seem to stir the same feelings of creativity in me. I would play with my kaleidiscope for hours.

Nowadays we have computer games, and video games, but where are the simple toys? I feel nostalgic about spirographs and etch-a-sketch toys too. I was very lucky to get things like that as Christmas presents.  I wonder how children would react to them today?

I know we should use less plastic, but maybe they could be made with recyclable materials….