Made another trifle today, I used sugar free jelly (not jam) which I added blueberries to with a small amount of port. Then topped with strawberry blancmange. Now it needs a topping of whipped cream… Yum!

I think it’s the cold weather and boredom that has drawn me to making my favourite dessert. The trick is to let the jelly cool and set before you add the topping of blancmange, and to let that cool before you add it to the jelly so it doesn’t melt it. Plus I add slightly less liquid to each bit so I know it will thicken properly.

If you don’t eat meat or wheat read no further (or substitute gluten free and meat free).

I wanted to use up some shop bought short crust pastry and some small sausages.

I baked four small sausages in the oven, gas mark 6 about 15 minutes. I let them cool slightly and got the left over pastry out the fridge. I pressed lots of off cuts of pastry togethef with a larger piece so that I ended up with a large-ish oblong. Then I placed two sausages together onto the pastry at one end and the other two at the other end. I folder the pastry over and sealed it by pressing it together. I used a bit of milk to glaze the top. There was a small bit of pastry left over so I wrapped that around some bits of cheddar cheese.

I cooked the sausage rolls for twenty minutes on gas mark 6. The rolls had started to brown. I put them back on for another five minutes.

When I took them out they were cooked on top but a bit soft underneath. I think this was because there was still a bit of fat coming out of the sausages?

The resulting rolls were tasty but I wish I had used shop bought flakey pastry instead.

Neither apple nor pine

Grows on a bush

When you see it

Or in an upside down cake. 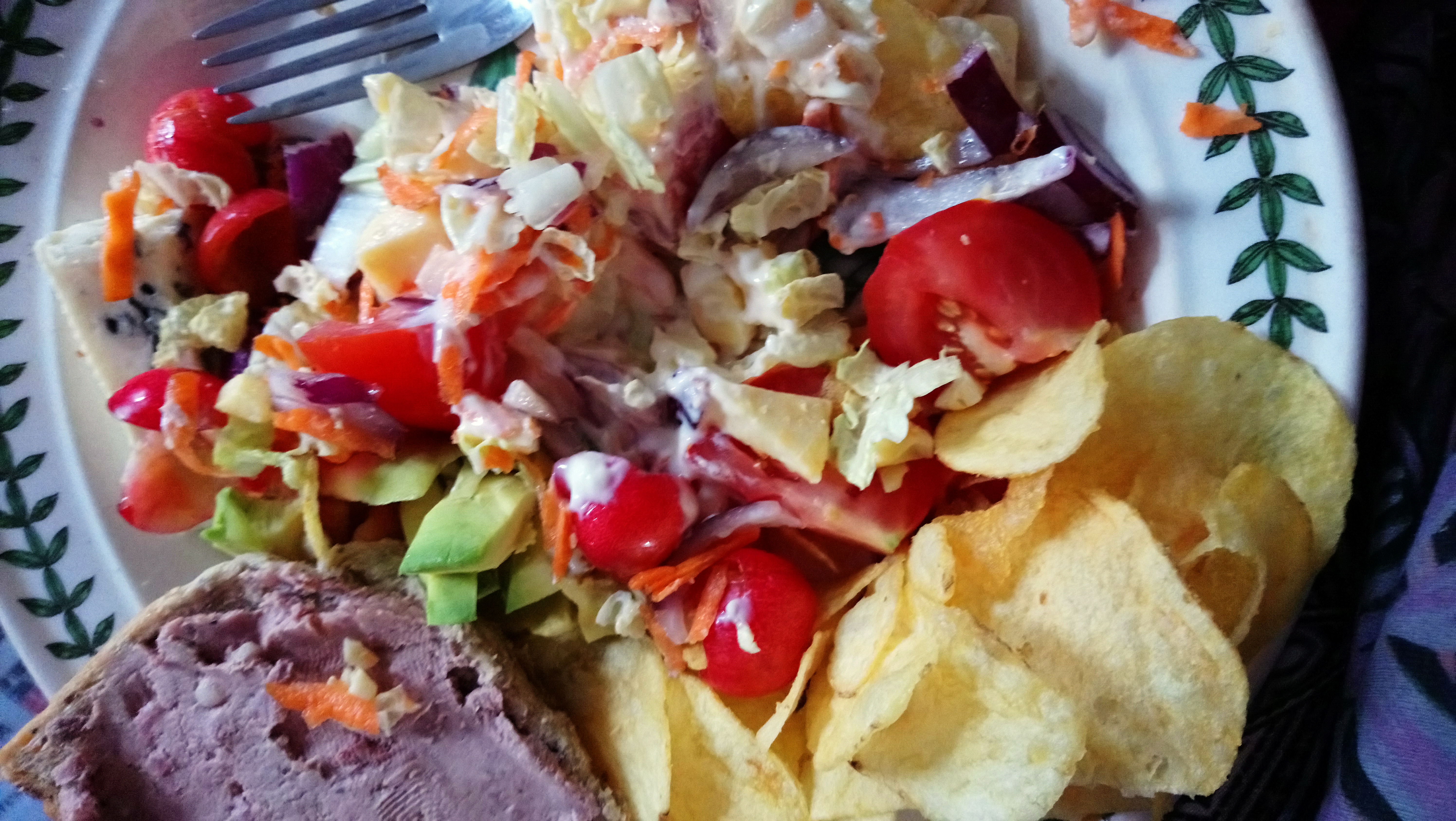 Home made coleslaw (cabbage, carrot, red onion) with reduced calorie mayonnaise. A small piece of brown seeded bread with a bit of pate, a couple of chopped up tomatoes, half an avocado pear and some de-stoned red cherries. Also a few cheese and onion potato crisps. On a Portmeirion plate. Why? Because I liked the colours mainly. I watched a programme about still life last night and the interest that images of food created was fascinating. At one stage still life was seen as the lowest form of art, but the innovations of artists gradually made it more accessible and acceptable. Artists like Paul Cezanne and Pablo Picasso bought new definitions of what still life meant. Art is fascinating. It’s funny the ideas you can get by staring at a plate of food. X

I don’t drink much, but I used to make wine. My favourite was a sparkling plum wine. I didn’t know what I was doing so I used a yeast that makes lots of gas and fizz. The wine was brewed in demi-johns, then I put it into old beer bottles with ceramic and rubber stoppers. When we opened the bottles it was a deep orange red and had a real sparkle.

Sadly I couldn’t remember what yeast I had used and I never got the same result. I also found that I was allergic to the sulphur dioxide that is used to sterilise the equipment, so I would start sneezing uncontrollably.

I then went on to brewing beer for a few years. That was fun and less difficult but in the end I sold all my demi-johns.

I just made a culinary disaster. I decided to make a milkshake with a mashed up banana and some milk I frothed up.

The milk was frothed in a glass container with a metal mesh on a length of metal and a lid (like a small caffitierre).

The disaster? If you try and mix mashed banana with milk make sure it’s properly smooth, or you end up with a cold lumpy mixture. It tasted OK though.

Nutritional facts, I think I read there are 89 calories per 100 grams. There isn’t as much potassium in them as urban myth says. People with latex allergy can become allergic to bananas. They are related to plantains which are more starchy and can be cooked. There are other species including green and purple bananas.

When I was a child I used to cook toast-on the gas fire!

I would come home from school and warm up in front of the fire, warming my toes, feet, hands and face. We didn’t have central heating, so only the living room was warm. I was older than my siblings so this was my job. Slices of white bread hooked onto the bars on the front of the gas fire with a metal fork. A few seconds and you turn the bread over. Delicious hot toast and I guess margarine because we couldn’t afford butter. If it was a Sunday I sometimes cooked crumpets. They are like a savoury bread like a muffin but full of holes  through the middle of them and at the top of them so when they have butter or margarine spread on them it melts right through the middle of them.

I remember the lovely smells of toast and margarine, together with a hot cup of tea in small cups with orange and brown patterns on them.

This memory was prompted by a question on the Alchemists blog page which asked for memories of being cozy. It’s good to uncover old memories like this. 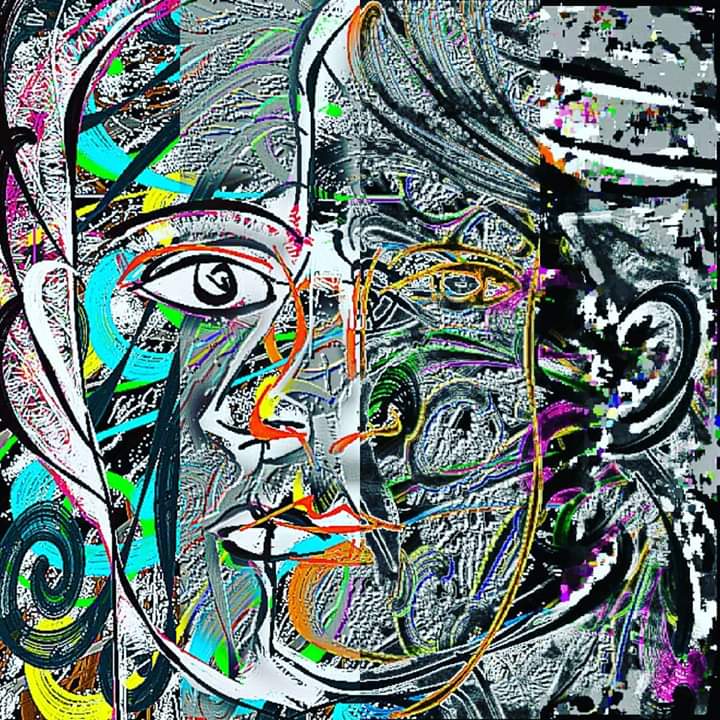 Face left, face forward. Underneath her name and a long number. Her mug shot. She didn’t understand why. What was happening? She was being blamed for everything.

The snake in the tree had started it. It spoke! Talked about it being the tree of knowledge. Well she had always wanted to learn, to go to school, to get to university. What was wrong with knowledge? But they had said only men can do that. Women aren’t allowed, they might get ideas above their station.

She had tried an apple the snake had offered her. It looked tasty. Not evil? No, more like a braeburn. Having eaten, she told her friend Adam about it. He said if she could taste it then he would too. Later they tried other fruit off other trees. Now she’d been arrested for stealing fruit!

The sins of the world, they called it. All over one measly apple. Would you Adam and Eve it?

People who read my blog a few weeks ago know that our pear tree had blown over, leaving the branches only about eight feet above the ground. We have had to prop it up with large pieces of wood. I have almost collected what was left on the tree and the ones we have are criss crossed with scars and dents. But once you peel the skin off they are juicy and sweet to eat. This photo was taken last year and I like it because the warm light is shining horizontally and turning the pears into almost liquid gold colours?