Painted a year or two ago. The derelict pottery at the back of Portmeirion pottery. I love painting bricks. Most of the windows are boarded, and the Falcon symbol is on the end of the building. Painted in Autumn, acrylic on canvas.

It’s still standing but I think I will take some more photos of it before long, it’s worrying that it’s not being maintained or restored as far as I know. I guess it might be taken care of one day, but I’m not sure when.

Holds it all together

End of an era

Death to a way of life.

To their sons and daughters.

Now they are lost.

Photo of Middleport pottery. The walls are stained with pottery clay. These buildings are now artisan studios. Make do and mend. Reusing old buildings rather than knocking them down. But it costs money to do that. Historical buildings are getting demolished, history is being destroyed. Old buildings that could be refurbished are sometimes left to rot. There is a place in Dudley, in the West Midlands, called the black Country museum. They have demolished old buildings, then rebuilt them on the site. Maybe my city should do the same. X

Enamel kiln at Gladstone pottery museum, Longton, Stoke-on-Trent, Staffordshire. These burn hotter than a normal pottery kiln. This is to create enamel from powdered glass, fired about 1400°C. There is a working enamel kiln at Stevensons in Middlewich on the banks of the Trent and Mersey canal. Enamels are used from jewellery to bathroom ware. This is because it has to be stronger and not chip or crack.

The industrial heritage of this country is hanging on. Places like the Black Country museum in Dudley in the West Midlands give us a place to see how the past was. Manufacturing changes and evolves. Soon robots and AI might be the only way things are made. But despite the old dirty polluting past may have been bad, it still stirs memories and romantic ideas of the way things were. 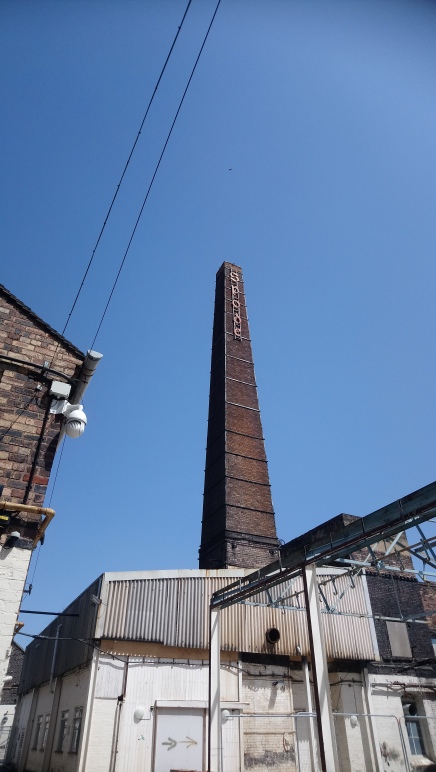 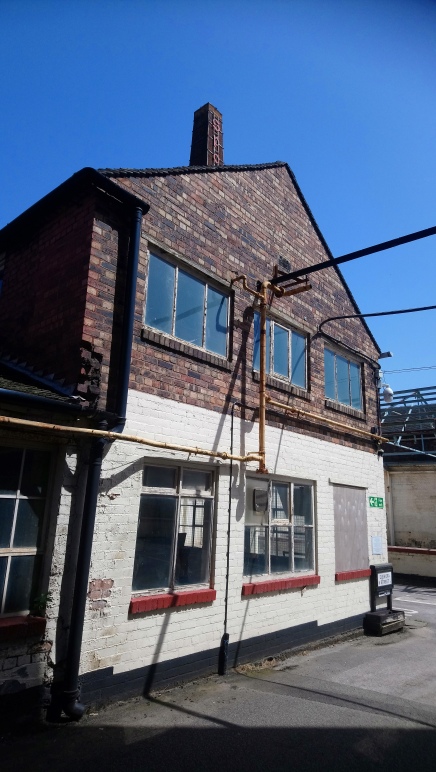 On a bright sunny day Spode can be fascinating. The huge chimney with its Spode sign and the skeletal remains of the factory show a stark yet beautiful side of the manufacturing world.

Spode Site is in the town of Stoke-upon-Trent and is situated in an area bounded by Glebe Street, Church Street and Eleanora Street.

The site is mostly off limits to the public, but studio holders and visitors are able to access parts of it to use and to produce arts and crafts and enjoy workshops.

The hotel at the site seems to be doing well and they have expanded the area outside for seating.

Then in September the BCB (British ceramic biannual) arrives in town. There should be plenty to see and do. 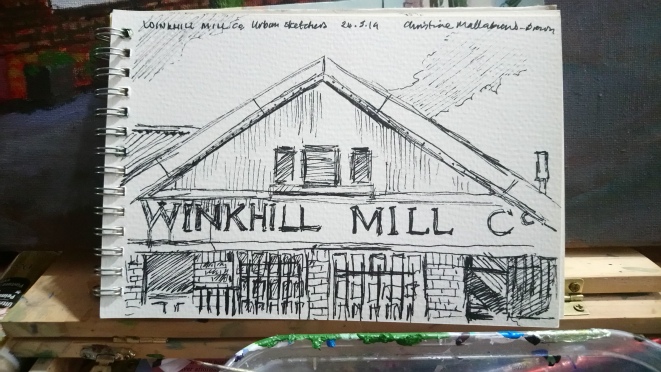 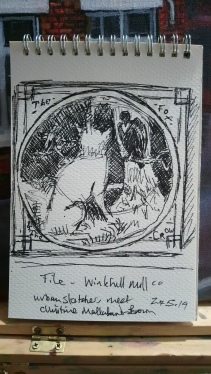 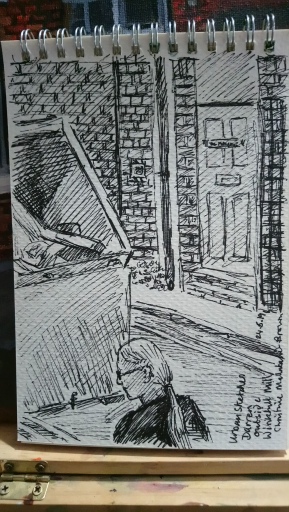 I needed a break today from painting, so I went out with Stoke Urban Sketchers for a couple of hours this afternoon. I’m still a bit in and croaky so I couldn’t manage more than that. Thanks to Danny, Andy (hope I’ve got his name right) and Richard from Winkhill Mill for letting us have access to the building. If you wonder what the machine is I think it’s a dust press for making tiles.

I went to the Mill a few weeks ago to see an exhibition there and I drew one of the tiles, the Fox and the Crow.

Stoke has lots of hidden museums. It’s open on a Friday and I think Saturdays?

A warm evening in March, out at Westport lake. One of my favourite places for a walk. Over the last few years the trees have grown and the management of the lake has been taken over by Staffordshire Wildlife Trust. The sun reflects off the water and ripples from the swimming birds make it sparkle. The lake was artificially created from the remains of a marl pit (where they dug out the clay for potteries) and old mine workings. It was created for wildlife in the 1980s I think when Shelton Bar Steel works closed ? 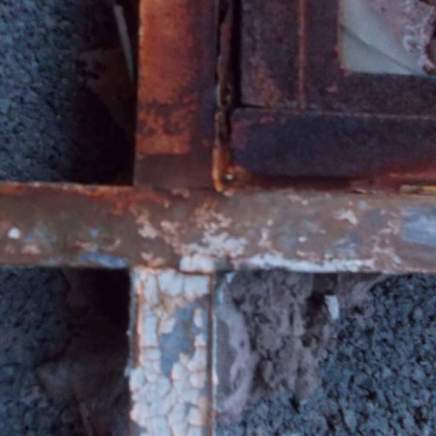 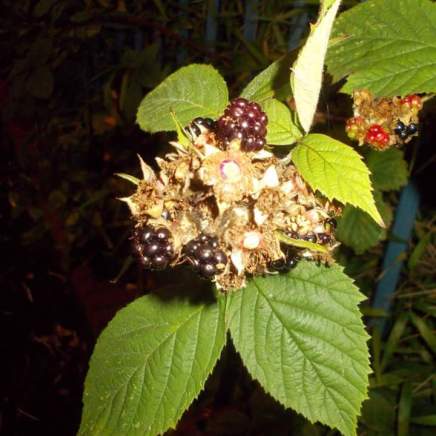 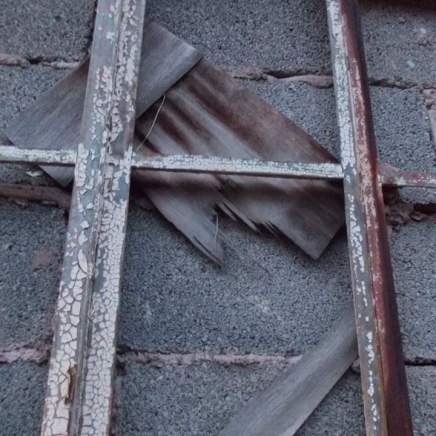 In 2015 I went on a photo walk organised by a friend round a local town called Burslem. The town is quite run down in places, but thats what made it interesting. Neglect sharpens architecture. Photos taken on an old vodaphone.

Things are changing at the old Spode factory site.

Old buildings that don’t have much historical merit are being demolished and older buildings , or more architecturally important ones are being released from their imprisonment in brick, mortar, chip board, steel and concrete.

Like an archaeological dig tipped 90 degrees, new surfaces and entrances are being uncovered. Courtyards with windows newly on view. Stacks of saggars piled on shelves up at those windows, small or large,  flat or square ….the weight of the saggars must be tremendous. I wondered if the shelves are rotting and if they could collapse .

I remember seeing a film called “solarus” or “solaris” once years ago. By Tarcovski? A Russian film maker. The character’s moved through a post industrial nightmare, and I can’t help thinking Spode uncovered would make a brilliant film set.

A recent film called “jawbone” was filmed at Spode. They recreated a boxing gym in the China halls there. So many new views. ….

walking along the new pathway to the studios there, I wonder at the air we are breathing in, dust everywhere…how do we know there is no asbestos or other contaminants?

The feral cats of Spode can be friendly.  A grey and white Tom cat was hanging about next to the Hulton art pottery. We were told that someone is thinking of rehoming him. He had water and food….my partner wanted to take him home. But we already have two of our own cats. I think he will be OK. I have nicknamed him Maurice. ….