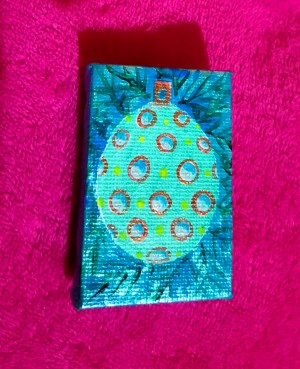 I’m doing a few more tiny canvases for my stall, I’m miles behind with being ill. I’d bought twenty and so far I’m part way through three.

I’ve started another couple of pictures of Christmas baubles. But the third is going to be a Bee. I think we have to really think about stopping using insecticides or we will be in very great trouble.

Ive also outlined a dove of peace and an angel. Better have a rest then do some more.

Finished tree decorations…. I think they are OK. I’ve tried to make them festive. I’ve attached ribbons so they can hang off a tree. Well I will be trying to sell them at the craft fair I’m doing in the morning…. More to do.. I’m trying to do a painting of Frost.  I’ve used lots of metallic paint, I think it’s in need of more detail though.

After a week of resisting temptations my cat decided to attack the Christmas tree last night. The round, glittery baubles just got too much for her. Before I knew it she was round the back of it and the whole artificial tree was shaking …. Rocking from side to side . Luckily I was next to it as it started to topple. I caught the top of it and hauled it back upright.

Now the tree is denuded of its colourful decorations, left with only a string of fairy lights and a few strips of shiny paper as a reminder that it is not twelfth night yet. I’ll put the lights on again tonight. ….

Hopefully the cat will have no reason to attack it again now the temptation has been removed….

Hiding under the tree, determined to shake the baubles free. Trying to use the plastic wrapped metal trunk as a scratching post.

Every so often she sneaks underneath, now the presents have gone, then stands up on her back legs – her front paws in the air, battling a glinting decoration, rattling the tinsel. A couple of times the tree has rocked and shaken like a fir in a tornado, almost, but not quite, uprooted from its three pronged stand.

Then out she shoots, scampers after a toy, a feather, a ball. The tree is forgotten till next time – then used as a hiding place, scratching post, and climbing frame in turn when she feels like it.

Twelth night will see the tree demolished and returned to its cardboard box home. What will cat do then?