The tiny green tomato was plucked off our tomato plant today. The surrounding ones are large and shop bought and the apple on the top right was a windfall off my sisters tree…

I can grow flowers, but not vegetables or fruit. I spend too much on seeds, and get plants from sales and swaps, but I don’t have good conditions to grow them in… Too much shade. Too many shrubs! 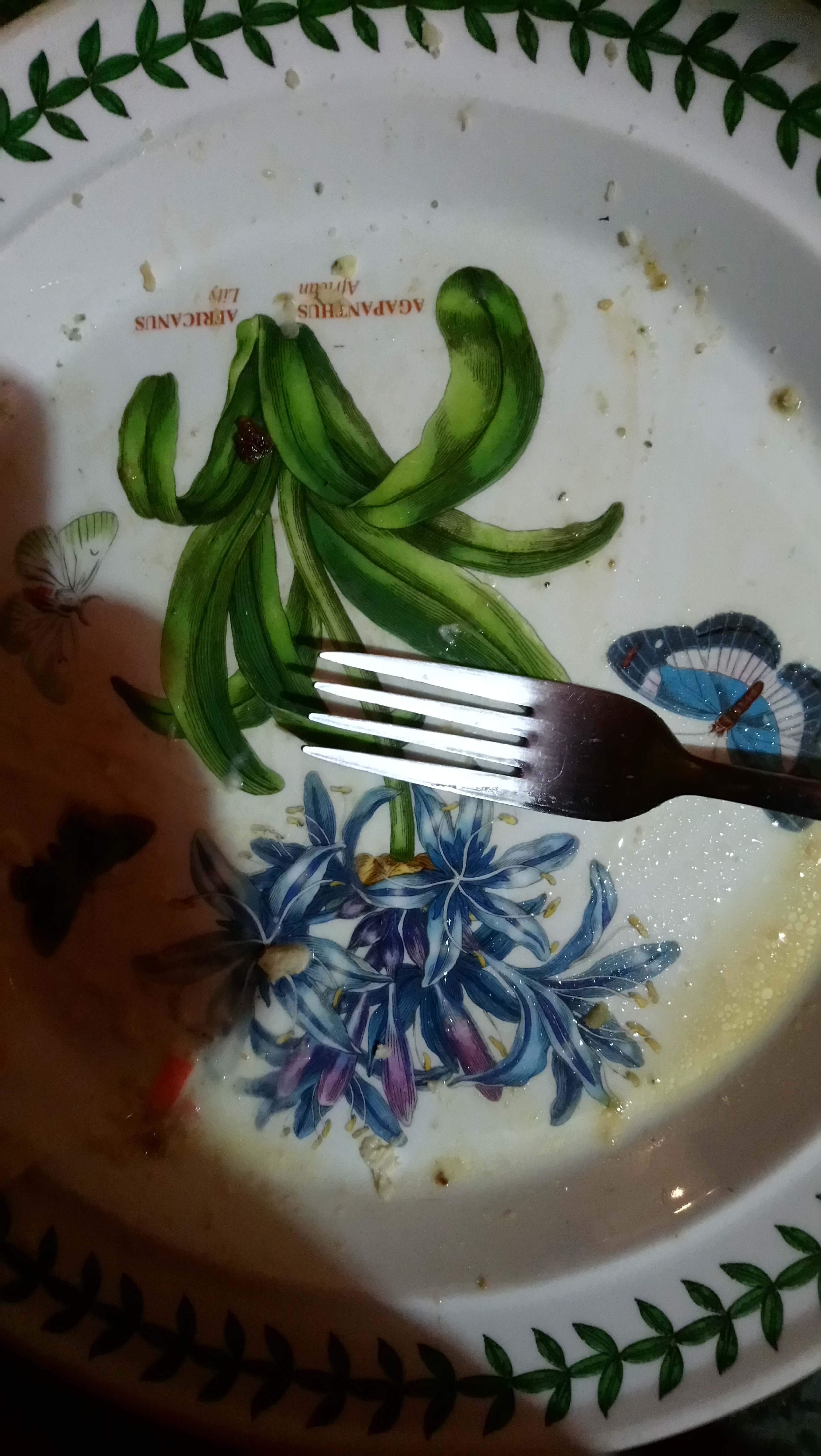 I would show you a photo, but I’ve eaten it!

Anyway I didn’t want to spend a long time preparing a meal, we have had simple food today.

This meal we had a mixed vegetable omelette with Stilton and coleslaw to go with it.

I fried up a whole chopped red onion. Then I added a handful of chopped olives to the pan. Then cut up three flat large mushrooms and added them. Then I added a couple of chopped celery sticks to the meal. I added a pinch of salt and pepper to the pan. While this mix was softening over a low heat I whisked up a few eggs and a bit of milk (depends on how hungry you are). I poured the eggs over the vegetables. As it cooked I moved the egg around so it didn’t burn on the pan. Eventually it was cooked through so then I took some Stilton cheese and crumbled a layer onto the omelette. Once it melted a bit I plated the food up with a spoonful of coleslaw and a hunk of chunky bread. Tasty..

I decided to make a curry tonight. It’s not a proper one and not pretty, but it was tasty.

Half a butternut squash

A small head of broccoli

Half a large (or a small), sweet pepper

Half a jar of tomato and garlic pasta sauce

Roast the chicken thighs in an oven with the half butternut squash cut into half. Put on gas 7, or a medium high heat for 25 minutes.

Meanwhile chop up the onion roughly. Put on a low heat in a frying pan. Soften in oil and add crushed garlic. Cut the courgette into small cubes, add to the pan. Then cut two tomatoes up and add together with the curry powder. Cut up the half sweet pepper and add to the pan. Finally cut up and add the broccoli.

In the meantime the butternut squash should have softened in the oven. Remove from the baking tray and put the chicken pieces back in for about another twenty minutes (if you want a vegetable curry just don’t cook any chicken).

Cut the rind off the squash, then dice the pulp. Add to the pan, add the pasta sauce and cover with a lid. Simmer on a low heat while the chicken finishes cooking.

Finally take the chicken thighs out of the oven. Remove the skin and discard if you don’t like it. Carefully cut the meat off the bone (the chicken will be hot). Make sure the juices are clear, if it is slightly pink, you can put it in the microwave for a minute to make sure it’s cooked through. Cut up the chicken into bits and mix into the curry. Dish out onto plates. Add a small amount of salt to season.

I like this because of the texture of the squash. If you don’t want meat, it makes a pleasant meal. You could add a dollop of plain yoghurt. Also you don’t need rice with it so it’s less carbohydrate.

Today’s #bandofsketchers prompt was vegetables, so I decided to draw some new potatoes. Metallic pen and pencils on black cartridge paper background. Makes a change from felt pens. Probably could have taken more time over it but I like the effect.

It’s a particular type, but I can’t remember what it is called. Something like romancero…? Not sure. Anyway I think its spirals are based on fibonacci numbers. You see the same pattern in flower petals or the seeds on a sunflower head. These remind me of fractal patterns and apparently there is computer code you can use to draw patterns like the Mandelbrot set. A attern out of chaotic numbers. Nature is amazing!

Sprouts to go with this evenings meal. I cut the bases off then cut a cross in the bottom of them. I don’t know if that’s what other people do but it seems to let them cook better. I put them on to boil with water from the kettle for about 15 to 20 minutes. I don’t like them over cooked.

I don’t have them very often. Usually just around Christmas and New Year. They are a seasonal vegetable, a winter crop. Some people think they have too strong a flavour and fry them with bacon. I don’t mind them at all. Definitely one of my five a day. 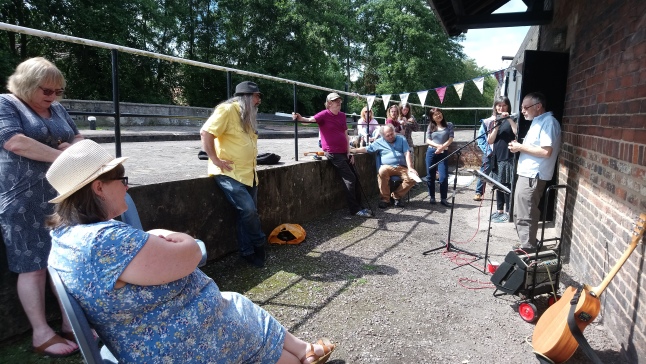 I still feel ill but I was pleased to go to the Art Lunch held at the Etruria Warehouse today.

A lovely lunch was organised by my friend Chris, with mostly vegetarian options. One thing that was really unusual was beetroot hummus. This was made with boiled beetroot and potato with walnuts, all whizzed together with garlic and a bit of vinegar. You could use lemon juice instead.

Sitting in the sun listening to musicians, with a beautiful lunch. Lots of cups of tea. Birthday cake because a friend is due to celebrate his birthday. Plus drawing some of the people who came. It was great fun. Both of us have come home exhausted but I’m glad we went.

4 yellow bell peppers with their tops cut off and de-seeded.

Small amount of lean minced beef (I could have used quorn mince). 600 grams.

1 corgette finely chopped. (after I cooked this I suggest 1/2 instead)

8 baby corn cobs, finely chopped. (after trying this use 4)

The tops of the yellow peppers, finely chopped.

Salt and pepper to taste.

Fry off the mince and vegetables till softened and cooked.

Once the meat and veg are cooked add the bolognese sauce and the brown rice.

Spoon the mix into the peppers. Cook them in a gas mark 6 (medium hot) oven for 15 minutes then check and if not cooked put them back in for 5 minutes.

Result: very tasty but a bit too much for two! Use less brown rice, half a courgette (zucchini) and 4 baby corn instead. (I’ve altered the amounts in the recipe) the original amounts would do for 3 or 4 people.