He woke up and saw the figure of a blue woman hovering in the bedroom. She was standing, but as he looked down to the side of the bed her feet were a couple of inches above the floor.

She had no facial features, like a mannequins dummy, blank faced, not even eyes. No mouth, no sound. He felt, somehow though, that she was looking at him? The angle of her head, tipped down and intent on where he lay. He noticed motes of dust in the sunbeam shining through the window. He could see them floating beyond the figure. It was dissolving as he watched.

Finally it faded, gradually, slowly, melting into nothing. No explanation, no reason, gone. All he felt was a wash of calm, not fear, and relieved that she was gone.

They met by the hellibores, just inside the cemetery gates. They were strangers, meeting because of a tweet one had sent and the other had read. They might have lived in the same town, the same street, but neither knew.

It was almost midnight when they met and misty, they nodded at one another, recognising a fellow conspirator.

They stood and talked, for minutes, exchanged notes, compared ideas. They were both in agreement. There was no doubts, they confirmed the transaction.

Yes that’s a meat feast pizza, two doughnuts and a bottle of cola.

The man got on his moped and drove off into the darkness.

He Lodge keeper took his order inside. Pizzas here, he said to his wife.. 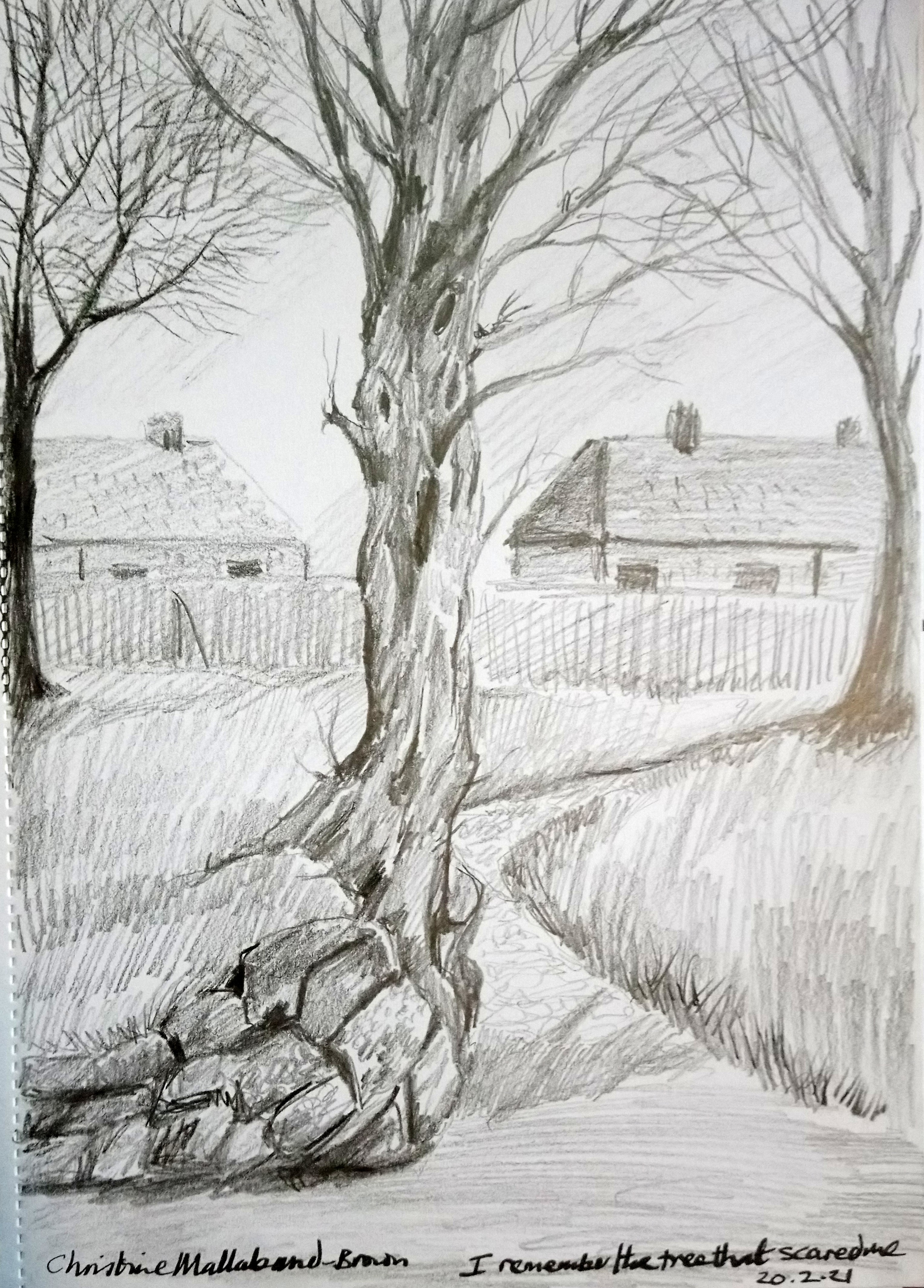 Oh I used to run past this tree. I was convinced as a child that it was inhabited by a ghost. As part of this terms college work we had to remember some landscape from our childhood and this was what I thought of.

I’ve probably missed out trees and I can’t remember if there were houses in the background. But it will remain with me forever! 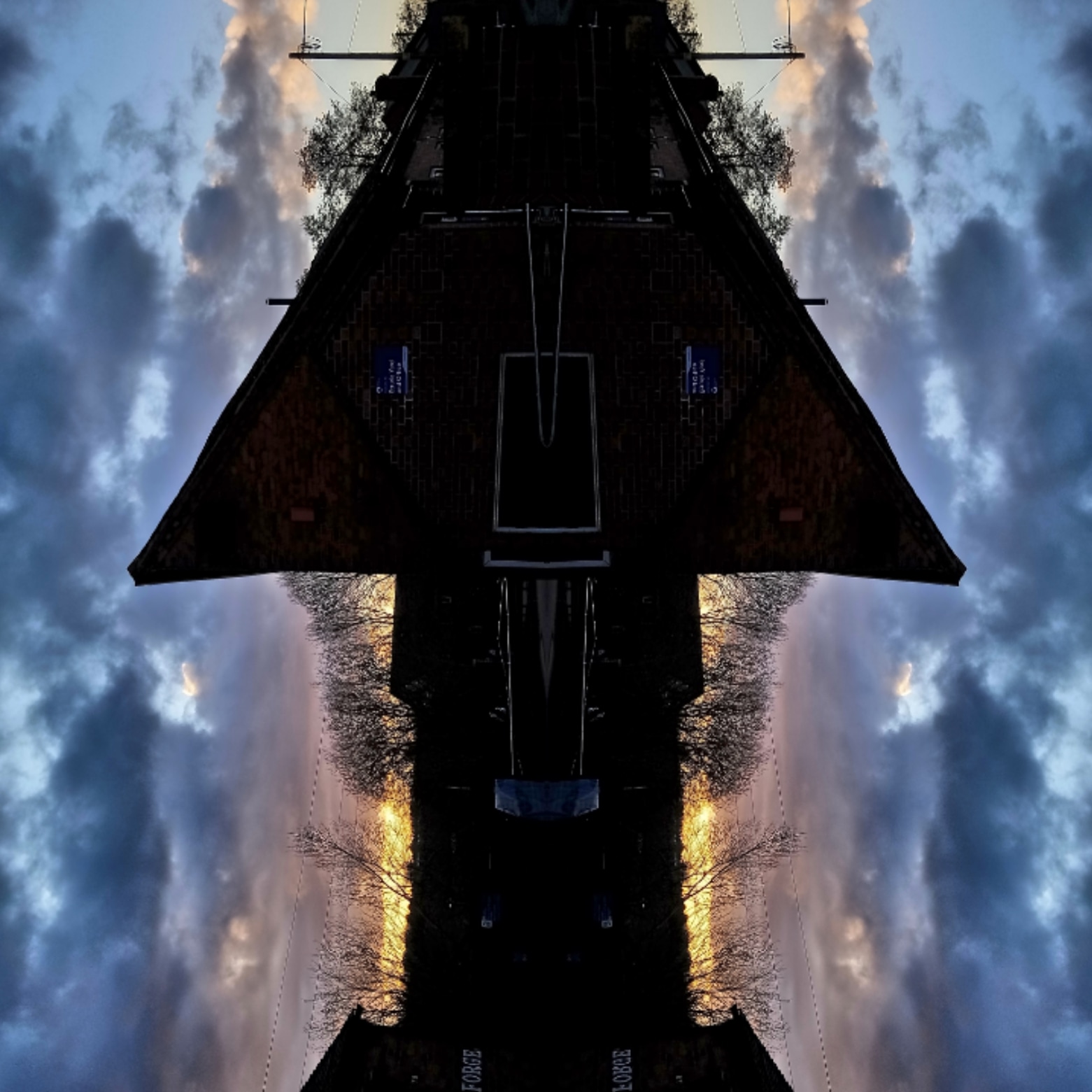 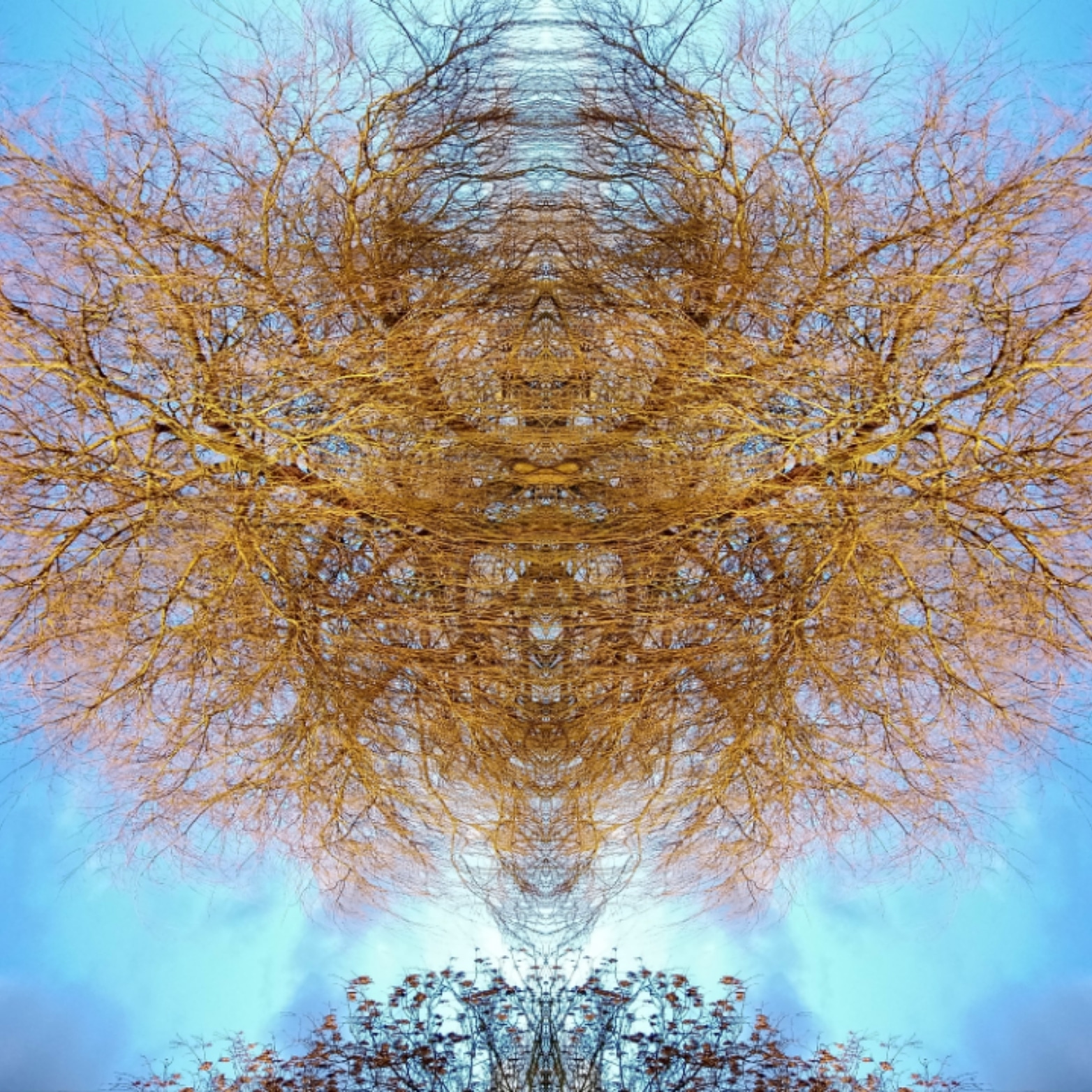 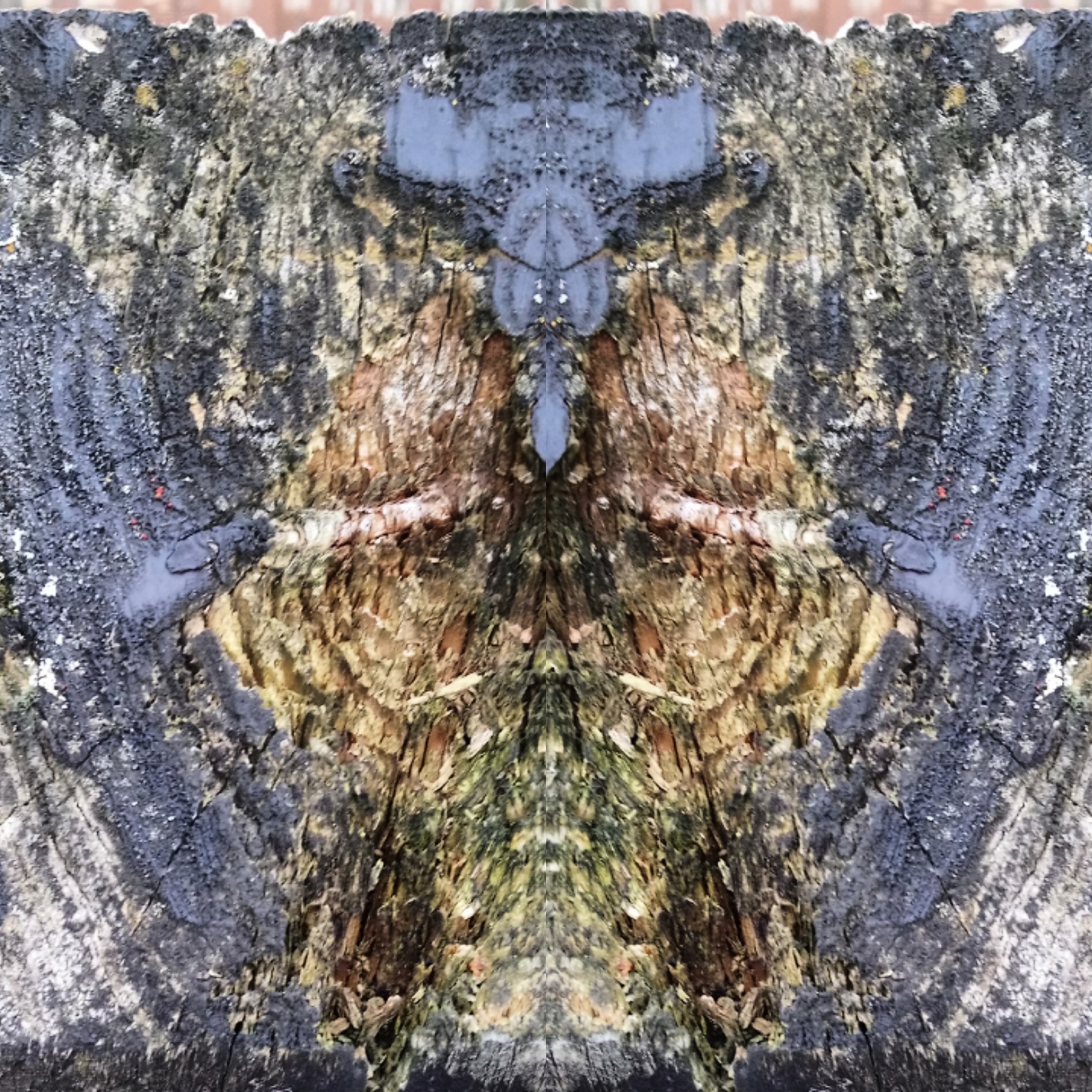 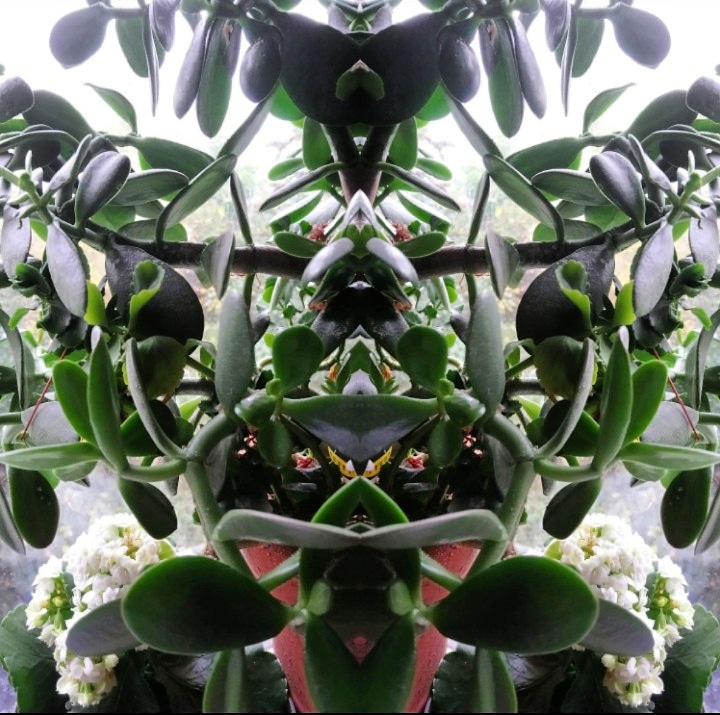 A few photos I’ve played around with in Layout app and Instagram. Either just mirrored or mirrored and rotated. Our topic at college this week is Pareidolia, which anyone who follows me knows I already do a lot of! Fun!

I remember a tree that seemed to have a face, and used to scare me when I was a child. There were knot holes where branches had broken off that looked like a face. I remember watching the Wizard of Oz and seeing the wicked witch. For some reason the tree and the witch were linked in my mind. I know I used to walk home through the park sometimes, but I wouldn’t go down that path if it was getting dark.. I also remember walking on the top of an old stone wall, balancing on the top of it, pretending to be a gymnast…. This was over forty years ago. When I look at photos of the park it has a lot more civilised appearance!

I was passing an antique shop one day when I saw the face of a woman looking back at me from an old cracked and crazed mirror. It’s bronze frame was chipped and pitted with age. The face looked like an old master painting, like a Jacobean lady, with a powdered wig and pale face.

I didn’t know how it was happening but I was drawn inside and paid far too much for it. Minutes later I was walking down the road with a brown paper package under my arm.

That was the beginning of the horror…..

What’s in the box? She asked. I couldn’t say he replied. It just arrived in the post.

They sat and drank coffee.

Open it? She said. No wait till Chrismas he replied.

That was three days ago. Now it was Christmas morning. Let’s open it now, she said? After lunch, he said.

Each time they put it off, the tiny Christmas elf in the box got weaker, hungrier, angrier. It had been posted to bestow three wishes. Now it had decided the wishes granted would be its own. It would start by attacking whoever opened the box.

Elves are fragile, but not as fragile as humans!

My hubby bought this today. I love green men.. But this is spooky! The face is sinister. I can imagine its a poisoned chalice! I added some texture to the photo which makes it seem more eerie….I think I would prefer it carved out of wood.. But I like it.

We met one evening

You were on a wall

And smiled at me

From your triangle eyes.

And someone will light you

A spark to your candle

The wind may blow

And your spark will go

This year for Halloween there have been far more filters on my phone to create strange faces and spooky images. It’s not something I would normally do, but just for a laugh I decided to choose four that I thought were the silliest and most frightful. (I say frightful because I don’t think they are very frightening). Apologies to anyone of a nervous disposition. I think Halloween coincides with a Celtic holiday called Samhain but I don’t know the history of either tradition really. I guess it’s a chance to have a party before the full gloom of the winter season envelops us. Next stop Christmas here in the UK.