After a long walk I decided to get a Thai takeaway. Mine was a red curry with duck. I had a small amount of special fried rice and stole a few of the King prawns and squid from my hubby’s yellow curry because he had had most of the rice. It was really tasty!

From Sawadee Thai Taste in Stoke….

I didn’t feel well so my hubby’s gone out to get a fish supper. Here’s my imagined version. Ignore the splodges that’s from a drawing on the previous page where permanent marker bled through…. 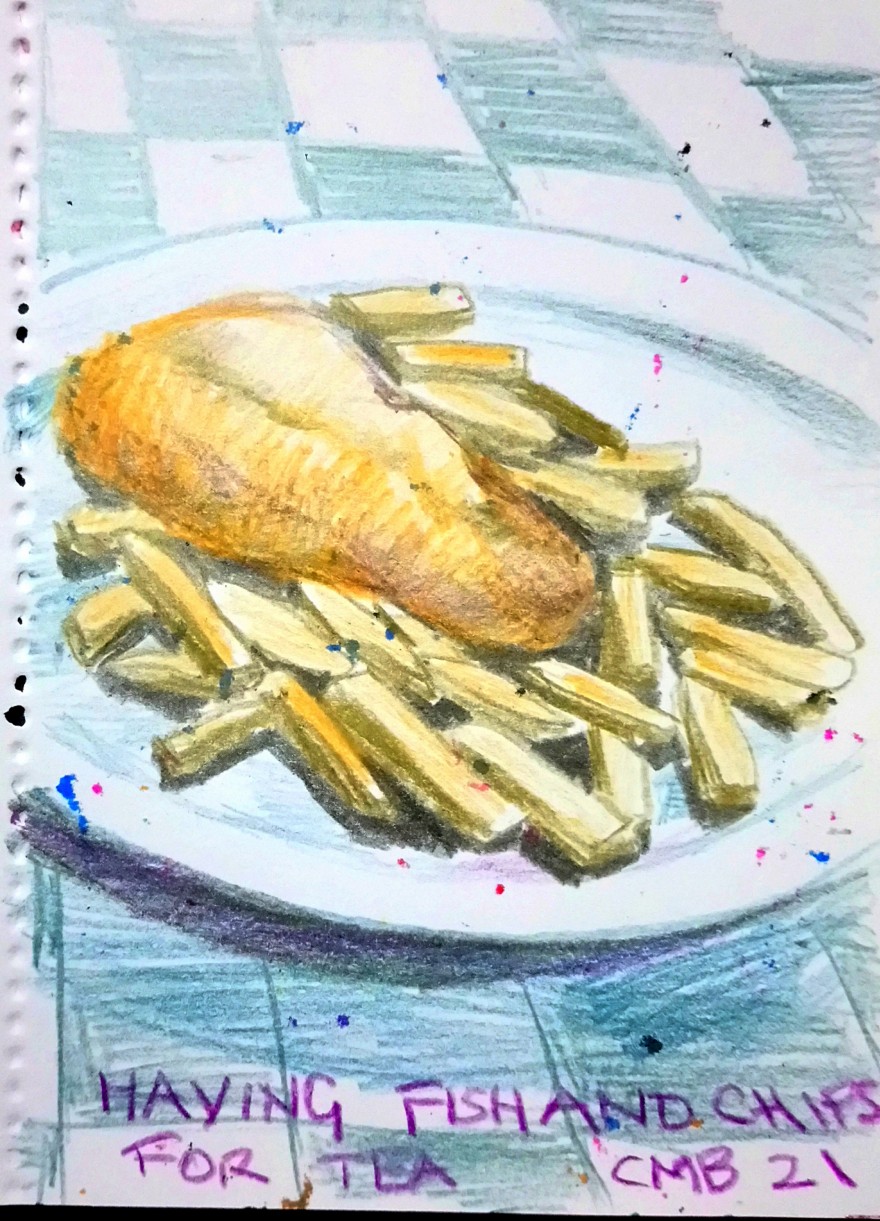 Tonights tea- a Thai takeaway from Sawadee Thai Taste restaurant in Hill Street, Stoke. My felt pens are running dry. I hope I can get some more. X it was very tasty.
This was our #bandofsketchers prompt. Shop or Takeaway….

A couple of my friends own restaurants, and now the government has told them to close they are only allowed to do takeaway meals. I feel like I will be buying a takeaway each week to try and help keep them going. With food short in the shops it may be the only way to get something interesting to eat. Yes I can live on vegetables and salads, but it’s nice to have a bit of variety, especially if its well cooked. I mean there is only so much binge watching you can do.

Then exercise. I might drive out to Cannock chase tomorrow for a walk. Somewhere quiet and away from people.

The other reason why I drew a slug.

I had fetched a takeaway meal from our local Chinese restaurant last night but had to go out for an hour before coming home to eat it with my hubby.

An hour turned into two (as it does), so I came home hungry and ready to eat.

I said hello, and my hubby complained he had lost a bottle of beer. He could remember drinking one but could not find the other bottle. But he proudly said he had made a loaf (he likes making bread). We went in the kitchen and he showed me the bread he has made. So where’s the takeaway I asked, looking in the fridge which was empty. Oh I put that outside to cool down, he said!? What?

He went out and bought the bag in, together with the beer bottle which he had taken out too.

Both had slugs on them!

I’m sorry to say it went in the bin. The little trays the food was in were covered with hungry slugs. The beer was empty, not because he had drunk it, but because he had put some in the bread. I was not a happy person.

Next time I’ve told him to use the fridge!