More cruise missiles rained down on Kiev in Ukraine today. The representative from the UN had been visiting, but Russia doesn’t seem to care. President Putin seems obsessed by getting a ‘victory’ by 9th of May. His attacks on Ukraine are despicable. Thousands of people have been wounded and many killed, some are forcably taken to Russia. Beatings and shootings abound and Russian soldiers are digging up the dead to mutilate the bodies and burn them so they cannot be identified. War crimes are being committed. His cutting off gas supplies to Poland is threatening to expand the conflict. He might try and attack Transnistria next. He is being expansionist and is acting like a spoilt boy. Russians can’t get truth because opposition is being stifled with thousands of people being arrested and put in prison. So anyway, that was my rant for today. I pray for peace. I fear more death raining down.

Photos, film and video of the War in Ukraine show huge plumes of black smoke rising over burning and ruined buildings, theatres and peoples homes. Meanwhile Putin continues to lie to the Russian people that no civilians are being targeted. He is using the same tactics he facilitated in Syria with President Assad. He is trying to encircle Kyiv and raise cities like Mariupol to the ground. He is evil and brutal. His propaganda to his country is that it is a ‘ special project’ not all out bloody murder. 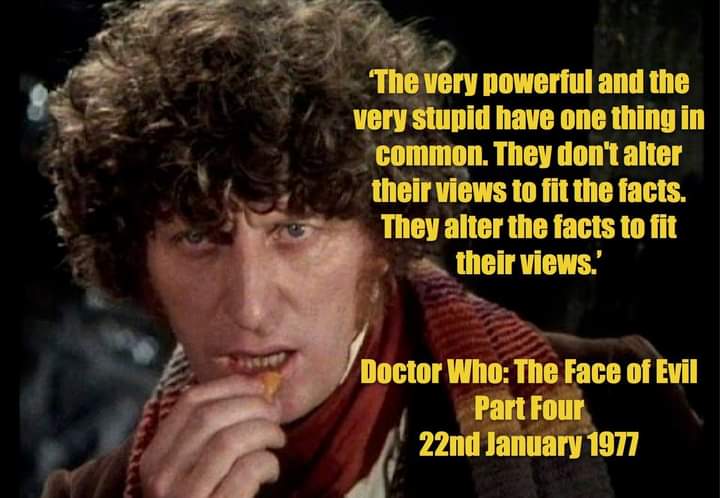 I just saw this meme or whatever it is on Facebook and had to ‘borrow’ it. It was actually on someone’s memories from four years ago but it was spoken by Tom Baker as The Doctor as it says in 1977. Perhaps he, or the writer of the episode had time travelled to the twenty first century. Of course George Orwell came to much the same conclusions in his novel 1984. (Which was actually written in 1948).

Fake News or propaganda is everywhere. I just think we should be more cautious about what appears on the Internet…..