This cygnet came over to see us while we were by the canal today. Sadly I had nothing to feed it. If I had thought I would have taken some brown bread. You are really supposed to feed them grain, but signs went up a few years ago saying don’t feed birds bread and some birds starved in the winter. I think the important thing is to give birds small bits of bread, if it’s big lums it can swell up in their crops and clog them up, also I guess it might be better if it’s a bit wet? Not sure, but as long as its not mouldy….Next time we visit I will take some bread x

The sun beating down on Etruria, Stoke-on-Trent today. Terraced houses lined up near the canal. This is the Cauldon canal that heads towards Leek in the Staffordshire Moorlands where it eventually joins with the river Churnet. The houses are lower down than the canal so there is a big retaining wall made of stone that prevents the water escaping from it. You can see the wall as it lifts up into a bridge over the canal on the left hand side. The street slopes away down towards the Trent and Mersey canal which is joined to the Cauldon canal by a series of locks. The Trent and Mersey is in the valley and runs close to the Trent River (which is really only a small river running through the city). The Trent eventually runs to the sea at Hull after passing east through Nottingham I think.

So these terraces are connected by water to many places. You might see them if you ever travel the canals.

We walked past this tonight at the canal workshops on the Trent and Mersey canal. Mostly rust, I was amazed that there was any paint left on it! The spokes have been cut off although the front wheel is still in place in its forks. One side of the handlebars has broken off completely. I wonder how it got in the canal? Was it stolen, was it thrown in because it could not be repaired? And was it dredged out of the canal or did a fisherman catch it by accident?

We will never know. Its not restorable so no doubt it will end up down the tip. Perhaps it will be melted down and turned into another bike frame. 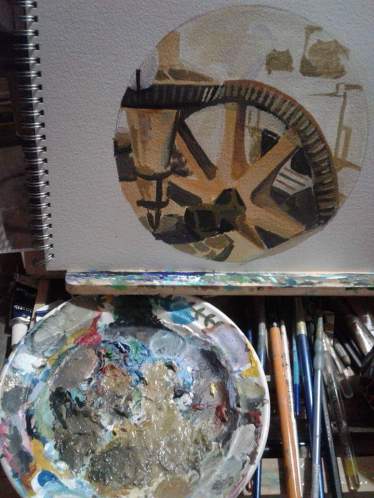 I did a series of illustrations for the canal and rivers Trust a couple of years ago. They were included in a leaflet about James Brindley the canal builder.

Each illustration was acrylic paint on watercolour paper because I wanted a more opaque picture than with watercolours. Each one was in an oval or round frame.

I wish I had a copy of the leaflet but I think they all went..