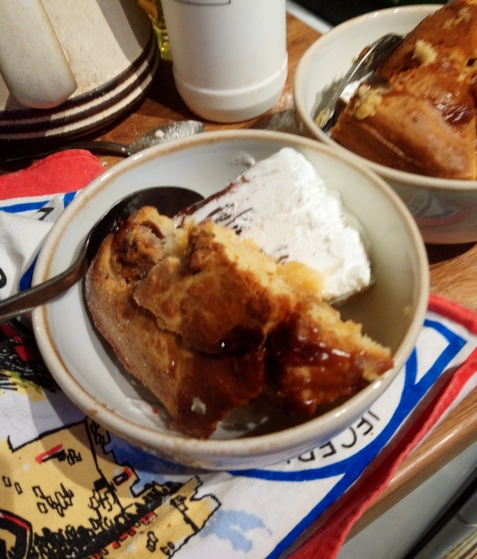 I give you (please take some).
Home made banana cake with toffees melted on the top.
Ingredients.
Half self raising flour, half plain flour, about 8oz with a bit of yeast. (what I had in the cupboard).
Some granulated sweetener, about a tablespoon full.
4 oz approx of butter
Two eggs
A small mug of milk.
A bit of orange juice.
Two sliced bananas.
Toffees melted on top for the last twenty minutes.

Method
I added the flours together with the yeast, added the sweetener, then added the butter and broke it up until it was crumbly. Then I added the eggs, mixed in milk. It was still a bit dry so I added a bit of orange juice, till it was quite soft. A bit like wet mashed potatoes.
I then chopped the bananas up and mixed them in. I left it for a while to see if it rose (it didn’t!)
Cooked gas mark four for an hour and ten minutes. About forty minutes in I noticed it was rising but split in the top. So I got some toffees we had at Christmas and placed them on top. The mess is where they melted.
Not pretty but tastes OK. Served the first bit with some ice cream while it was hot. Not bad!